or puppet-master or puppetmaster

What does puppet master mean?

A puppet master is a person or group that secretly controls other people or things, as if they were puppets.

Where does puppet master come from? 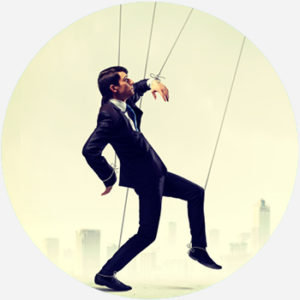 In the early 1600s, puppet master referred to a “puppeteer,” someone who literally works a puppet in a show. Because puppeteers usually perform hidden in the background, puppet master lent itself to a shadowy, metaphorical agent that controls from behind the scenes, manipulating people and things like a puppeteer operating a puppet. As Oscar Wilde wrote in an 1891 essay: “Life cheats us with shadows, like a puppet-master.”

This notion of a puppet master as an evil, manipulative figure has no doubt been helped by popular media. Robert Heinlein’s 1951 novel The Puppet Masters depicted aliens taking over human nervous systems, turning earthlings into their puppet-like slaves. The rock supergroup Metallica released the album Master of Puppets in 1986. It contained a lot many angry political lyrics and imagery, with the implication that the puppet masters were the ruling political upper class, sending soldiers to their graves. The horror movie The Puppet Master, featuring terrorizing puppets animated by an ancient curse, was released in 1989 and led to multiple sequels. The Marvel Comics villain Phillip Masters is also known as the Puppet Master, who uses radioactive clay to create puppets of real people, whose mind he controls.

In the 20th and 21st centuries, the term puppet master, as the Metallica album suggests, has often been used to describe many controversial political figures, such as Joseph Stalin and Niccolo Machiavelli. The same puppet master label has been applied to Dick Cheney, the former Vice President of the United States, as well as Steve Bannon, the so-called Chief Strategist of President Donald Trump’s administration.

“Will you make one about the people who control everything? The puppet master pulling all the strings on both sides? We both know who I speak of.”
Decky Politicsforum (March 15, 2017)
“Looking back on season one of Fargo if you think about it Lorne Malvo was Lester's puppet master.”
Matt Ogden @Mattogden1993 Twitter (April 4, 2017)
“Several associates said the president had quietly expressed annoyance over the credit Mr. Bannon had received for setting the agenda—and Mr. Trump was not pleased by the ‘President Bannon’ puppet-master theme promoted by magazines, late-night talk shows and Twitter.”
Peter Baker, Maggie Haberman and Glenn Thrush, “Trump Removes Stephen Bannon From National Security Council Post,” The New York Times (April 5, 2017)
SEE MORE EXAMPLES

The term puppeteer refers neutrally to the performer, whereas puppet master is generally used as the villainous label. Calling someone a puppet master is certainly not a compliment, because the term comes loaded with connotations of scheming and malevolent power.

In politics, a puppet master is sometimes an aide who controls the symbolic leader (e.g., president, king) behind the scenes. Sometimes, however, a puppet master can refer to leaders or countries controlling another, as Russian president Vladimir Putin has been described as President Trump’s puppet master.

Puppet-master is occasionally used as a verb, e.g., “He was puppet-mastering their decision to sell the family farm.”

This is not meant to be a formal definition of puppet master like most terms we define on Dictionary.com, but is rather an informal word summary that hopefully touches upon the key aspects of the meaning and usage of puppet master that will help our users expand their word mastery.