What does qq mean?

Qq is an emoticon that represents “crying.”

In the gaming community, it is used as a taunt against players seen as unskilled or weak. Elsewhere online, qq variously denotes sadness, loss, or “crying.”

Where does qq come from? 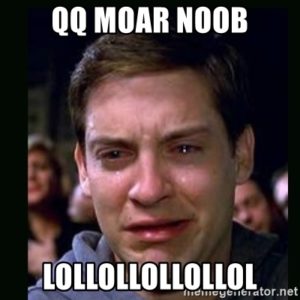 Among gamers, qq can represent the act of crying or feelings of sadness upon defeat, and it’s usually issued as an insult or taunt.

Qq is thought to come from that the fact that its capital form, QQ, resembles eyes shedding tears, similar to other emoticons such as :'( or T-T.

OH DUDE I WAS CRYING AT THAT POINT, I ACTUALLY CRIED A BIT AT THAT PART QQ

Another theory, however, claims qq originated from players of the 1995–96 computer game Warcraft II: Tides of Darkness by Blizzard Entertainment.

In that game, a player could quit a game, as out of rage or frustration, with a keyboard shortcut: holding the Ctrl key and hitting the Q key (quit) twice. Because of this, more expert players would ridicule their less skilled counterparts (noobs) by advising them to qq, or quit the game.

Many other popular games made by Blizzard, such as Diablo (1996) and Starcraft (1998), featured a similar keyboard shortcut.

Raid night! Let’s hope I survive. Woke up at 2:30am this morning and couldn’t get back to sleep until almost 5am. I’ll just let the OP priest carry me tonight. #qq #warcraft pic.twitter.com/0geTFuoApd

Evidence for qq appears on Usenet forms and Urban Dictionary in 2006, nearly a decade after these games were first released. However, qq is discussed—and credited to—the Warcraft series. In gift bags given out at its BlizzCon gaming convention 2008, Blizzard Entertainment featured tissues printed with the phrase QQ n00b, further embedding qq in the Warcraft community. 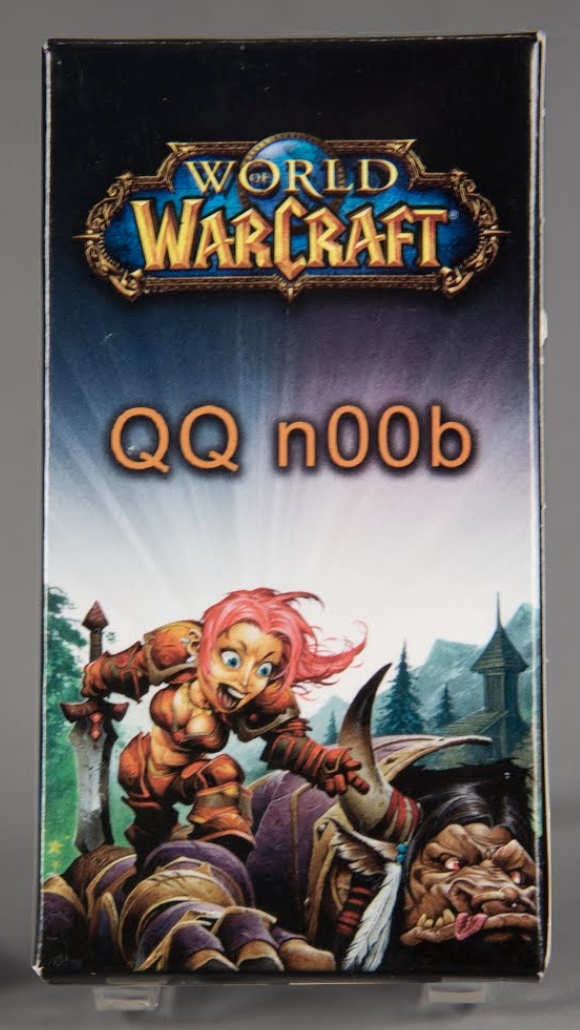 practically everything you own wears down over time, so why cry when someone speeds up the process? because it's something YOU wouldn't do? / QQ moar
Anonymous, 4chan, February 2019
If people QQ about it, I'll just take the videos down and refilm them.
@veroicone, September 2016 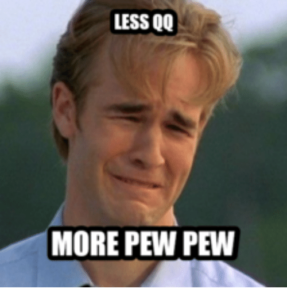 For non-gamers, qq or QQ is treated like crying eyes emoticons, often standing in for the word “cry”, or otherwise used to express loss, defeat, or sadness.

Among gamers, qq or QQ is likewise used as a synonym for “cry,” although in gaming contexts it’s typically used in ridicule, e.g., go qq, loser.

Why does DJ Sona have to come out right before PAX East when I really shouldn't justify buying her?! I'm going to go qq in a corner now.

It’s often seen in the phrases “qq noob“ or “qq moar,” where moar is an intentional misspelling of “more.”

Second and LAST hint! His name starts with the letter "N". Food with letter "N". Heading off now – if no one guesses it gg wp qq moar

This is not meant to be a formal definition of qq like most terms we define on Dictionary.com, but is rather an informal word summary that hopefully touches upon the key aspects of the meaning and usage of qq that will help our users expand their word mastery.