What does quid pro quo mean?

Tit for tat. You scratch my back, I’ll scratch yours. Or, if you want to get a little fancier, quid pro quo.

This is a Latin-derived expression referring to something done for someone in exchange for something of equal value in return.

Where does quid pro quo come from? 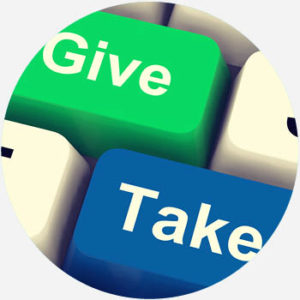 In Latin, quid pro quo literally means “something for something” or “one thing for another.”

The expression was notably used in the Middle Ages by apothecaries who were figuring out what substances may be substituted for another (quid pro quo) in medicines. The phrase was added to a 1535 English translation of Dutch humanist Erasmus, who apparently questioned the questionable quid-pro-quoing of these quacks.

By the late 1500s, quid pro quo spread from medicine into general contexts for a “tit for tat.” A 17th century history on the reign of King Charles, for instance, described Christianity as a quid pro quo in that people must repent for redemption. 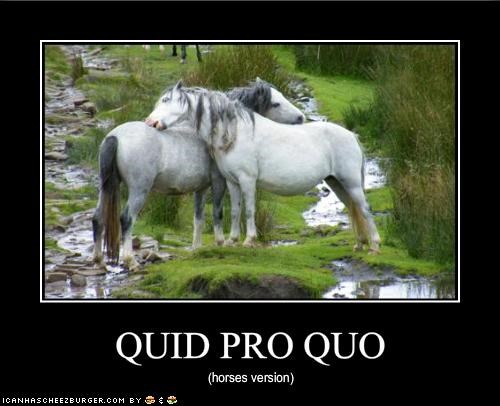 Quid pro quo especially made its way into legal, political, and commerical texts by the 19th century, a useful shorthand for all sorts of reciprocal exchanges.

Since the late 20th century in labor law, quid pro quo is widely used as a name for a type of workplace sexual harassment in which an employer holds an employee’s job hostage in return for sexual favors.

…being asked (facetiously) to edit FB updates. Is there a more thankless chore? What would be good quid pro quo? #fb
@DorisTruong, April, 2009
Police investigators rolled into the Prime Minister’s Residence Tuesday morning to interrogate Benjamin Netanyahu in the high-profile Bezeq graft probe, having acquired new evidence from a key state’s witness reportedly implicating him in an illicit quid pro quo deal.
Raoul Wootliff, The Times of Israel, June, 2018
Despite what you've heard, Mueller doesn't have to prove a quid pro quo to prove a #TrumpRussia conspiracy. A quid pro quo is required to prove bribery, but it's not an element of conspiracy to defraud the U.S. (Not to say such proof is lacking, just that it's not required.)
@Delavegalaw, June, 2018
SEE MORE EXAMPLES 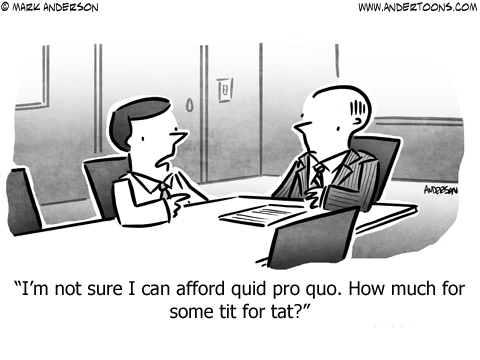 In business contexts, quid pro quo can have a positive or neutral connotation, characterizing a fair contract involving the exchange of goods or services for compensation.

In political contexts, however, quid pro quo reeks of corruption, where quid pro quo arrangements with lobbyists suggests bribery or “pay for play.”

This is not meant to be a formal definition of quid pro quo like most terms we define on Dictionary.com, but is rather an informal word summary that hopefully touches upon the key aspects of the meaning and usage of quid pro quo that will help our users expand their word mastery.