Table for one, please. A quirkyalone is a person who prefers being single to being in relationship with someone just to be in one.

Where does quirkyalone come from? 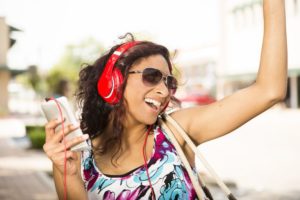 Quirkyalone was coined by writer Sasha Cagen. She first used the term in 2000 in an essay she wrote for her magazine To-Do List. As she defines a quirkyalone: “A person who enjoys being single (but is not opposed to being in a relationship) and generally prefers to be alone rather than date for the sake of being in a couple.” She also uses it as an adjective to describe the quirkyalone behavior of such people.

The term, of course, blends quirky and alone. Use of quirky suggests that preferring singleness is eccentric or anomalous in the eyes of mainstream culture but also that quirkyalone individuals embrace that identity.

Cagen’s quirkyalone got wider attention—and many readers who related to the phenomenon—upon publication in another magazine, Utne Reader. This success led Cagen to publish a 2004 book Quirkyalone: A Manifesto for Uncompromising Romantics, which describes “quirkyaloneness” in detail.

After the release of the book, term, and search interest in it, skyrocketed. Even journalists like Anderson Cooper featured segments on quirkyalones.

As of 2018, Cagen maintains a website, quirkalone.net, and newsletter dedicated to the quirkyalones among us.

The late-2000s meme Forever Alone is a kind of humorous, if sad, answer to quirkyalone, focusing on unwanted loneliness and singleness as opposed to sought-out solitude.

who else is quirkyalone?
@tengkuamelya, January 2015
Singlehood is now being celebrated as a legitimate lifestyle; we’re called “proud singles” or “quirkyalones.”
Tim Kreider, The New York Times, September 2015 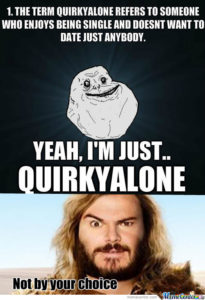 Since 2004, quirkyalone has spread in popular culture and on social media.

Quirkyalone: someone who is single but doesn't feel that they have to date just for the sake of it.

Quirkyalone is most often used by people who self-identify as a quirkyalone or feel the term gives them meaningful, and sometimes humorous, self-expression.

This has been my reality for too long to call it a stage. When I first discovered the quirkyalone type, I felt seen

This is not meant to be a formal definition of quirkyalone like most terms we define on Dictionary.com, but is rather an informal word summary that hopefully touches upon the key aspects of the meaning and usage of quirkyalone that will help our users expand their word mastery.