What does Rafiki mean?

To Rafiki someone is to smear a substance on their forehead, which can be sexual in nature, or to lift up someone or something for honorary public presentation. Both meanings stem from the cartoon mandrill Rafiki from Disney’s The Lion King.

Where does Rafiki come from? 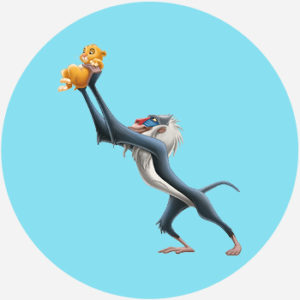 One of the most memorable scenes of Disney’s 1994 animated film The Lion King is its opening sequence: Set to the tune of “The Circle of Life” all of the animals of the African savanna gather to see the anointing of the lion cub, Simba, as the next king.

The “priest” in this ceremony is a wise, old mandrill named Rafiki, which means “friend” in Swahili. Rafiki ceremonially indicates Simba’s future leadership role by cracking open a fruit and spreading its juice across the lion cub’s forehead. Rafiki then holds the cub high over his head, presenting him to the crowd of animals gathered below the cliff.

The scene refers to the ancient tradition of Hebrew high priests and European monarchs who anointed royalty by spreading (or pouring) oil on a person’s forehead. And, when Rafiki presents Simba to the crowd, it is so the animals can see that he has been anointed and so Simba can see all of his future subjects.

The Lion King was a massive success and a defining film of its generation. Rafiki became so associated with these two actions, that the associations inspired two slang verbs.

This first Rafiki is “to smear a substance across a person’s forehead.” The earliest instances, recorded on Urban Dictionary in 2007 and appearing on Twitter by 2009, describe the vulgar act of spreading semen, feces, or menstrual blood on a sexual partner. The verb, however, has spread to more innocuous substances like to Rafiki ketchup on someone’s forehead as an allusive reference to the film.

The second Rafiki is “to lift someone or something up for display,” usually with two hands over one’s head as a way of esteeming or worshipping it. A person could Rafiki a cake they’ve proudly baked and are eager to share. Less common than its “smearing” counterpart, the “lifting” Rafiki emerges on the likes of Urban Dictionary by 2011.

omg.... girls Rafiki'ing others with their period blood is genius and way better
@6god6cunt6, July 2013
The pastor went Rafiki on a baby today while he was christening her. #Church
@gogonotdancer, July 2013
In conclusion: Russ got rafikied with paint, Adam is driving Bobby's car back to State, and Bobby is covered in mud. #Bucknell
@RealCraigMagid, March 2014
SEE MORE EXAMPLES

Rafiki is occasionally used in informal speech, but it is mostly used in online conversation by adult-aged viewers who grew up watching The Lion King. It can be active (to rafiki someone/something) or passive in construction (to get/be rafikied or rafiki’d). On social media, the term is sometimes hashtagged as #rafikied.

The “lifting” Rafiki and “smearing” Rafiki (when said using substances like mud or mustard) are used as creative, playful references to The Lion King. The sexual Rafiki, however, may be considered offensive.

This is not meant to be a formal definition of Rafiki like most terms we define on Dictionary.com, but is rather an informal word summary that hopefully touches upon the key aspects of the meaning and usage of Rafiki that will help our users expand their word mastery.