Feedback
roasties
rolling in the deep

or roger that [roj-er th at]

What does roger that mean?

Roger that is a phrase used to affirm or acknowledge a statement or question.

Where does Roger that come from? 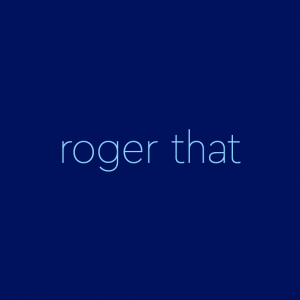 Roger that dates back to US radio communication as early as 1941, based on then-use of the given name Roger in the US military phonetic alphabet for the word for the letter R. Here, the Roger stands for the initial R in “(Message) received.”

To indicate a message had been heard and understood—that is, received—a service-person would answer Roger, later expanded to Roger that, with that referring to the message. In military slang, the phrase Roger wilco conveyed the recipient received the message and will comply with its orders, shortened to wilco.

Roger was brought into the spotlight in part due to public broadcasts of NASA’s Apollo missions in the 1960s. Soon after, Roger that entered the popular lexicon as an interjection (Roger!), noun (He gave me the roger), or verb (I Roger what you’re asking) to communicate assent or understanding.

Examples of Roger that

Roger That: Reaching Today's Military Consumers
Nielsen, report title, November, 2014
ME: how’d that traffic stop go / NEW KID: good sarge / ME: cool cool hey you ever walk up on a violator vehicle with an umbrella again I’m going to have you lobotomized / NK: but it was rai / ME: they stick an ice pick into your frontal lobe it probably hurts / NK: roger that sarge
@drknstormynite, March, 2018
Roger, Roger. I'll work on that right away and also while I'm working on that could we have a confirmation, a confirmation, on earlier transmission from AF-1, stating that the commercial telephone service, I say again, commercial telephone service for the Johnson residence should be discontinued with a direct line to -- eh -- White House. Do you Roger that?
The White House, Transcript of Air Force-1 Kennedy assassination radio traffic, November, 1963
SEE MORE EXAMPLES

Who uses Roger that?

Though Roger is no longer the official term for R in radiotelephony in the military, law enforcement, aviation, and navigation, Roger and Roger that do still enjoy use in military, commercial, and recreational communication to confirm receipt of messages or orders.

Roger that, however, is more commonly used in everyday speech and writing, equivalent to a Yes or OK. For instance, if someone asks over the phone or text-messages “Can you pick up some milk from the store?”, the recipient may reply Roger that for style, familiarity, or for a playfully official or military air.

While Roger that is often used as an affirmation, it frequently appears in questions seeking affirmation: “Do you Roger that?” or “Did you understand my message?”

Rogerthat is also the name of an Australian band.

This is not meant to be a formal definition of Roger that like most terms we define on Dictionary.com, but is rather an informal word summary that hopefully touches upon the key aspects of the meaning and usage of Roger that that will help our users expand their word mastery.

roasties
rolling in the deep
Home / Words / Slang / Roger that