or #RunningManChallenge or the Running Man

What does Running Man Challenge mean?

The Running Man is a viral dance trend involving a distinctive dance to the song “My Boo” by Ghost Town DJ’s.

Where does Running Man Challenge come from? 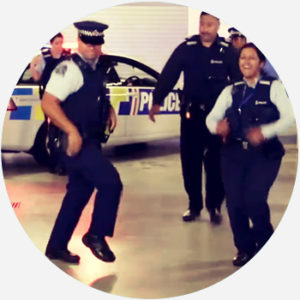 The Running Man Challenge was created by Kevin Vincent and Jeremiah Hall, two New Jersey high school students. The two filmed themselves doing a dance move called the Running Man to the 1996 song “My Boo” by Atlanta-based hip-hop group Ghost Town DJ’s. They posted it on Instagram on January 7, 2016 with the hashtag #RunningManChallenge. Their dance—not to be confused with a different hip-hop dance style called the Running Man, popular in the 1980s and ‘90s—originated in the New Jersey club dance scene. It consists of pumping one’s arms in tight movements close to the body while shuffling crossed feet and keeping the head in place.

University of Maryland basketball players Jaylen Brantley, Damonte Dodd, and Jared Nickens saw the video, liked the idea, and posted their own version in April 2016. In fact, they continued posting more versions where they started doing the challenge in increasingly incongruous situations. Members of other sports teams and celebrities took up the fun challenge of making their own videos, and soon the dance trend went viral, spread online by the hashtag #RunningManChallenge. Some videos of the Running Man Challenge feature people randomly breaking out into the dance when the song “My Boo” comes on.

The Running Man Challenge was popular throughout 2016 and inspired many variations. One of the most popular iterations was the New Zealand Police’s version, which won the New Zealand Social Media Award and prompted responses from other police forces, further contributing to the trend’s popularity.

“I always break out in the running man dance to diffuse awkward situations.”
@ADDiane Twitter (February 28, 2017)
“Neymar Jr. doing the running man challenge is just what you need the morning after the holiday weekend.”
NBC Sports Soccer Facebook (September 6, 2016)
“Like the Harlem Shake and Running Man Challenge before it, the odds are this won’t last long.”
“NFL players master the 'Mannequin challenge',” Wide World of Sports (November 5, 2016)
SEE MORE EXAMPLES

The Running Man Challenge is similar to other viral video trends, such as Gangnam Style, the Harlem Shake, and the Mannequin Challenge.