or I’m still gonna send it [send it]

What does send it mean?

Send it or I’m still gonna send it is a popular phrase from a viral video on social media. It’s used humorously when performing audacious or dangerous stunts.

Where does send it come from? 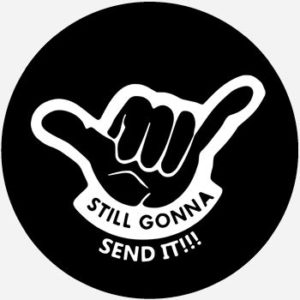 Send it originates from a viral Facebook video posted on March 1st, 2017. The short clip features a stuntman nicknamed Larry Enticer who utters memorable catch phrases before jumping his snowmobile. “Are you silly?” he asks, before claiming that he’s “still gonna send it” despite the dark and frigid conditions outside. Larry proceeds to crash his snowmobile.

In mid-2017, his videos gained further exposure on platforms like Reddit and YouTube. Larry Enticer was featured on an episode of the Comedy Central series Tosh.0 in June, 2017.

Enticer’s send it comes from the rock-climbing slang, send, a run in which a climber completes a route without falling or resting. The term—said to originate in climbing slang in the 1990s and possibly inspired by the notion of sending as “delivering” on a promise—spread to snowboarding, skiing, mountain-biking, and skateboarding. In these extreme sports, to send is to perform a run cleanly and flawlessly. The related expression full send, emerging in the 2010s, means to do something to the extreme or in a hardcore manner, even if it ends in failure.

Examples of send it

Yup here’s to not caring 🤙🏽 just gonna send it
@tjcookespeaks, February, 2018
Just broke my wrist but I’m still gonna send it before my lunch is over
@1_jonmike, February, 2018
Snowmobile maniac Larry Enticer is the greatest Canadian stuntmen ever to grace the internet with his Radwood-grade mullet, denim wardrobe and his uncanny ability to just send it.
Stef Schrader, Jalopnik, December, 2017
SEE MORE EXAMPLES

Who uses send it?

I’m still gonna send it is a defiant pledge to perform an unlikely, inadvisable, or dangerous feat. The phrase is used when performing a reckless stunt without regard for potential consequences.

Most notably, send it has been used by popular YouTube star Jake Paul. On July 17, 2017, Los Angeles-based television station KTLA interviewed Paul about noise disturbances in his neighborhood. Imitating Larry Enticer, he told KTLA, “The neighbors hate me, but I’m still gonna flippin send it” before speeding away on his dirt bike. The clip itself went viral and further popularized sending it.

This is not meant to be a formal definition of send it like most terms we define on Dictionary.com, but is rather an informal word summary that hopefully touches upon the key aspects of the meaning and usage of send it that will help our users expand their word mastery.