Leaving right after—or to have—sex? This sex-related departure can be called a sexit. Sexit can also be used as a riff on Brexit, describing a given country’s hypothetical departure from a larger political body. Sometimes the term is used in political earnestness, but just as often it’s used to humorous effect. Because sex.

Where does sexit come from?

There’s a small chance you’re here in search of information about the Slovakian heavy metal band Sexit, originally called Exit before they realized the name had been taken. But that’s a pretty deep cut. 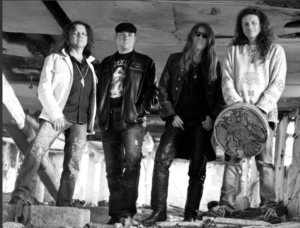 More typically, sexit is used online and in messaging as a blend of sexual and exit. It’s found on Urban Dictionary by 2009, and users have given it various creative definitions. Leaving a person’s place right after having sex? A sexit. Leaving a place because a couple just can’t wait to do it? A sexit. Some eve refer to a man “pulling out” during intercourse as a sexit.

Speaking of pulling out: in June 2016, the UK voted to leave the European Union in a political move popularly referred to as Brexit. An earlier Scottish exit from the UK in 2013 was similarly being discussed under the unfortunate name of Sexit.

In 2018, the titter-worthy Sexit became popular during the discussion around a South African exit from BRICS, the economic association of Brazil, Russia, India, China, and South Africa.

The good news is that nothing will happen, or the #EU risks upsetting all Eastern-European countries, and will create Pexit, Hexit, Slexit, Sexit,....😅😅
@VrouwvdVrijheid, September 2018
I c this trend in News where leaving of someone or something is headlined as Rexit or Brexit.So if I leave from sumwhere am I Sexit??
@iamsrk, June 2016

Diehard Slovakian metal fans notwithstanding, Sexit is most commonly used as a joke term, riffing on the same linguistic structure of Brexit to describe other political -exit‘s.

If Sweden votes to leave the EU would it be called #Sexit?#Sweden #EU

Occasionally, people may use sexit for a sudden, post-coital departure. This tends to have a crass masculinity about it, implying just using a woman for sex. But that’s not to say men are the only one capable of sexiting.

I discovered Sexit last night. An uncomfortable withdrawal after sex with only 50% happy with the result.

Sexit also sees occasional, one-off use for when two people are just itching to shack up.

"Irish Sexit" – when the two of you leave a party to DO IT.

Let's make this a part of the vernacular.

Just as often online, though, you’ll see sexit as a typo for sexist.

Putting Serena at the centre is NOT fair and pure sensationalism. And it is lazy journalism, sexit and racist. The UMPIRE was at fault and should be the centre of the piece and critique. But I'm not surprised. Y'all a bunch of racist mofos who'd be waiting for Serena's downfall.

This is not meant to be a formal definition of sexit like most terms we define on Dictionary.com, but is rather an informal word summary that hopefully touches upon the key aspects of the meaning and usage of sexit that will help our users expand their word mastery.