What does slay mean?

Slay can mean “to kill a person or animal,” “to make someone laugh,” “to have sex with someone,” or “to do something spectacularly well,” especially when it comes to fashion, artistic performance, or self-confidence.

Where does slay come from? 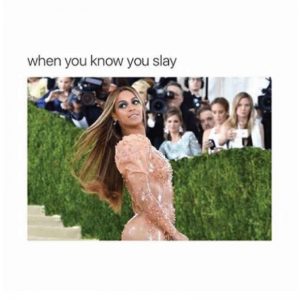 Slay is an old word with Germanic roots that’s found in early Old English, but it was generally reserved for killing mythical beasts and vanquishing enemies on the battlefield—GOT style.

Fast forward to the 1920s, the age of jazz, flappers, and some serious slang. To slay someone in the Roaring Twenties meant “to make someone laugh very hard,” commonly expressed as You slay me!

There’s some evidence that slay emerged as slang for “looking attractively fashionable” in the 1800s. But in black, Latinx, queer ball culture in the 1970–80s, slaying definitely came to refer to when an outfit, hair, makeup, dance moves, and attitude were all flawless. It’s a metaphor: One is “killing it” with their stunning self and style.

Slay spread in the intersectional worlds of gay culture, fashion, and the drag scene. It was heavily featured in 1991 in the influential New York drag documentary Paris Is Burning. When RuPaul’s Drag Race brought drag culture into millions of living rooms starting in 2009, slay got a massive signal boost.

In 2016, Beyoncé took slay mainstream. She commanded her ladies to get in formation and slay. The ladies of the world answered with another term originated by queer ball culture: Yas, queen! Slay had slain, crossing over into (though some would say being appropriated by) non-queer black and feminist spheres. 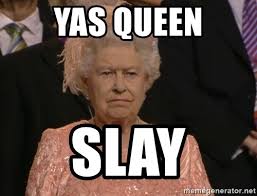 In an interesting twist, slay queen has become slang for a vain, vapid, gold-digging woman in Kenya.

“Say no to the dress. Go bridezilla queen. Be difficult. He don’t deserve you. Cheat queen cheat. Yasss. Slay.” -Me as a bridesmaid
@Grantkline, September, 2018
SLAY kaifaaaaa omgggggg those looks and she takes hotness to another level! She is so fierce!!!! #ThugsOfHindostan
@katslayinn, September, 2018

Giphy
Because White concludes that at the heart of how we slay — whether wearing natural hair, sporting Kente cloth, choosing a baggier jean over a more fitted one, going makeup-free, or beating our faces within an inch of their lives — is authenticity. And without this realness, White says, it's impossible to slay.
Elizabeth Wellington, The Philadelphia Inquirer, August 2018
SEE MORE EXAMPLES

While an old word, slay, for “kill,” has not fallen out of use. Buffy the Vampire Slayer literally and figuratively slew on TV in the 1990s as did the character Jaime Lannister, the Kingslayer, on Game of Thrones in the 2000s. The metal band Slayer have been slaying their guitar since 1981. 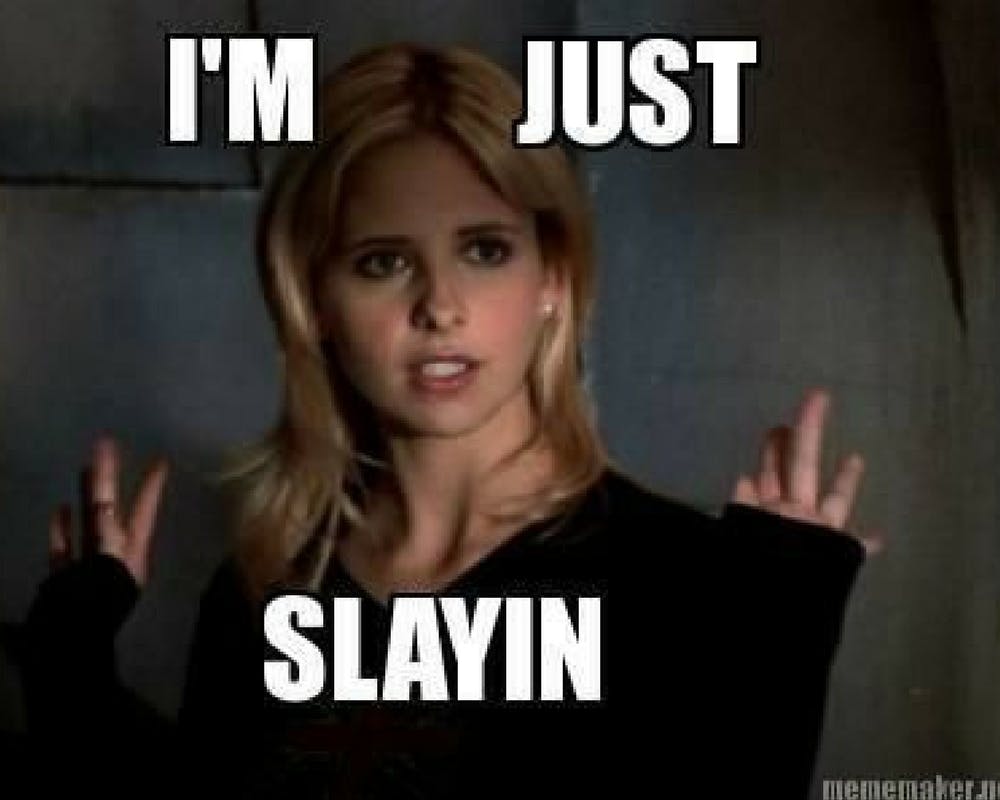 As for the slang slay, it’s especially found in gay and black female culture. It can be used whenever a person looks self-confidently good, acts in a self-empowered way, or does or achieves something spectacular, especially in the face of some challenge. It’s often issued as exclamation: Slay! That is, Do it!, You got this!, Right on! While the formal past tense of slay is slew … for real, the slang past tense tends to be slayed.

As with a lot of contemporary slang rapidly popularized on social media, slay has been the inspiration of cultural products, from makeup like Slay All Day to books, like Constance C.R. White’s 2018 How to Slay: Inspiration from the Queens and Kings of Black Style. Actress Nia Sioux released an anthem to slaying, “SLAY,” in 2015.

Slay has gone mainstream, but be mindful that it originated in black, queer culture, which may see insensitive or glib uses of the term as appropriative.

This is not meant to be a formal definition of slay like most terms we define on Dictionary.com, but is rather an informal word summary that hopefully touches upon the key aspects of the meaning and usage of slay that will help our users expand their word mastery.