slide into the DMs

What does slide into the DMs mean?

To slide into the DMs is online slang for sending someone a direct message on social media slickly and coolly, often for romantic purposes.

Where does slide into the DMs come from? 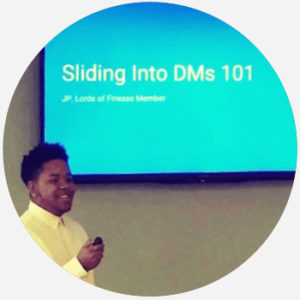 To slide into the DMs is a reference to sending someone a private message on social media, often to initiate or extend romantic contact, with a suave confidence. It takes a conversation from public to private. The phrase can vary depending on its user, as one can slide into his/her DMs or slide into your/yo DMs, for instance. A person, say, might text a friend they are going to slide into her DMs to try to get her phone number.

DMs are an initialism for “direct messages,” the private messaging feature on Twitter. They are inherently more personal, intimate, and exclusive than a public post, since no one can see them but the sender and recipient, who often must be already following each other on the social media platform. The verb phrase slide into also suggests smooth social skills, since initiating a private conversation, particularly with a stranger, could lead more easily to rejection.

While the abbreviation DM originates on Twitter, people commonly refer to private messages on other social media platforms as DMs. So, one can say they are sliding into the DMs on sites Instagram, Facebook, or OkCupid, too.

The earliest reference to sliding into the DMs on Twitter occured in August 2010, when a user tweeted: “*wonder who ur sliding into dms with*.” The expression began spreading, according to Google Trends, in 2013, when the phrase was explained on Yahoo Answers. The rise of online dating likely helped its spread.

The phrase first appeared on Urban Dictionary in 2014. That year, sliding into the DMs inspired a popular meme featuring the phrase sliding into the DMs like or the hashtag #SlideIntoTheDMs followed by a funny picture, video, or GIF of a person or animal variously sliding, e.g., a kid sliding down a waterslide or an animal sliding across ice. Many of the memes depict someone sliding with skill while many others are humorous, showing someone crashing or losing control to joke about failed efforts to slide into the DMs. In 2014, the idea was turned into a YouTube video by Tpindell, called “Slide In Yo DMs Like…” which illustrates the idea in comedic form.

Examples of slide into the DMs

“sliding into your girl's dms like”
Chelsea @flamboyfriends Twitter (August 2, 2014)
“Happy Heart Day, from your favouite single girls throne. #SlideIntoTheDMS #HowBahDah ”
niccis Instagram (February 13, 2017)
“The Dallas Mavericks star told reporters Thursday that he was able to convince Ben Stiller to play in his charity tennis tournament by sending him a private message on Twitter. 'I slid into his DMs, like the kids say these days,' Nowitzki said.”
Caitlyn Holroyd, “Dirk convinced Ben Stiller to play in charity tennis game by sliding into his DMs,” theScore (September 15, 2016)
SEE MORE EXAMPLES

Who uses slide into the DMs?

Given the risk of rejection in taking a public conversation private, and given the prevalence of online dating, many online advice and how-to articles advise men and women on how to slide into the DMs.

Though usually meant in a romantic sense, sliding into the DMs can also apply to interactions between a normal person and a celebrity, since actually having private correspondence with a major public figure is widely considered rare and special, even if it’s not romantic. Justin Bieber was said to slide into fans’ DMs when he direct-messaged song lyrics to his followers in 2016.

The phenomenon of sliding into the DMs is sometimes referred to in noun form as the DM-slide.

Sliding into the DMs is often criticized or joked about online.

Boys will tell you they're single, cheat on their girlfriend with you, you end up on the receiving end of her wrath, they'll both block you, you'll move on with your life and then 2 years later he'll slide into your DMs with 'hey sorry about all that drama, anyway how's you?'

This how I slide into the dms pic.twitter.com/tnLiIPlLkP

Slide into the DMs is also increasingly being used to refer for simply sending someone a direct message to make a conversation private.

hey if ur a musician, can play the guitar, have a dad bod, about 5ft 9” and Scottish pls slide into my dms x

This is not meant to be a formal definition of slide into the DMs like most terms we define on Dictionary.com, but is rather an informal word summary that hopefully touches upon the key aspects of the meaning and usage of slide into the DMs that will help our users expand their word mastery.