What does stan mean?

Stan is slang for someone who is a very zealous fan, especially of a celebrity or music group. Stan can also be a verb for liking something a great deal.

Where does stan come from? 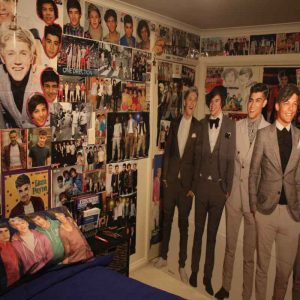 The origin of stan, now widely used in fandom culture, may be surprising. In 2000, rapper Eminem released the single titled “Stan.“ The song and video are about a young man, named Stan, who is dangerously obsessed with Eminem. Stan displays his obsession in various ways, including adopting the rapper’s look, confessing to self-harm, and recording his eventual death with the intention to send it to Eminem.

One early person to use stan for an obsessed fan was the rapper Nas in a 2001 track where he raps: “You a fan, a phony, a fake, a pussy, a Stan.”

An Urban Dictionary entry describing stan for intense fandom was added in 2006, and one of the first tweets using stan as a verb for greatly liking someone came in 2008.

The slang spread online in the late 2000s and early 2010s, with stans of different fandoms arguing for the superiority of their interests. In 2010, the website Stan Wars launched because of these online arguments.

It’s funny how harmonizers are always coming for little mix, it’s like they don’t have a girl band to stan... oh wait they don’t 🤷
@jerrieslm, September, 2018
But the Internet has allowed fans to organize and act together, and in doing so, wrestle some power from the usual gatekeepers — label employees, publicists, managers. Stans aren’t just cheerleaders. At times, they resemble public-relations experts, media organizations, consultants, and activists. And there are a lot of them.
Nolan Feeney, Entertainment Weekly, November, 2017

Stan can be used as a verb or a noun. If you really like a certain celebrity, someone could call you a stan, or say that you stan them.

Specific fandoms are referred to as stans, e.g., BTS stans.

mcu stans we are not ready for the masterpiece that the eternals is going to be pic.twitter.com/XQD5l8ko4B

As stan has evolved online, stan is often used as a verb in the construct we stan, and is often used to shower love on public figures, often for something specific, unexpected, or commendable.

We stan an intellectual pic.twitter.com/whszvQZhMO

the only boy in there with sense, we stan for you finn #LoveIsland pic.twitter.com/XjR40gnWZY

We stan artists who credit other artists 👏👏👏 https://t.co/2V9nn4eHEo

Stans often have specific nicknames, as fans of Mariah Carey are called her lambs, of Justin Bieber, Beliebers, or of Lady Gaga, Little Monsters.

Stan initially had—and still can have—a negative connotation, especially when referring to online fandoms (as on Twitter and Tumblr) who are seen too aggressive, obsessive, protective, or otherwise overzealous concerning the celebrities they love.

This is not meant to be a formal definition of stan like most terms we define on Dictionary.com, but is rather an informal word summary that hopefully touches upon the key aspects of the meaning and usage of stan that will help our users expand their word mastery.