Feedback
starboy
stay in your lane

or stasher or stashed [stash-ing]

What does stashing mean?

Have you ever been romantically involved with someone but never met any of their friends or family or have never even been featured on their social media? If so, you might be the victim of stashing, or when a partner hides another from friends and family and from their social media.

Stash also often refers to weed, drugs, alcohol, candy … anything you’d hide away because of embarrassment, greed, or, you know, the law.

friends with benefits, Tinderella, plenty of fish, Netflix and chill

Where does stashing come from? 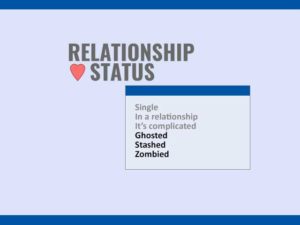 Stashing is credited to Ellen Scott in a column for the UK tabloid Metro in August 2017. The name comes from the fact that one partner in the relationship is concealing the other from the rest of their life, they have stashed the other away.

Why would anyone do this? Well, stasher reasoning includes:

For the person being stashed these may all be good reasons to get out of the relationship … fair warning.

Erica told #AMPMorningsWithKatieAndEd that she's being stashed by her FB. She wants us to call him to see what's up 😳
@ampcalgary, August, 2017
There's a difference to keeping your relationship private and keeping it a secret.. I was stashed away from social media & friends in my last relationship. 100% go fuck yourself if you do this to anyone.
@urbangigi, August, 2018

The HotFriday Talks
But whatever you do, don't suck it up and refuse to address it. You deserve better than to be stashed aside and hidden from everyone, like that copy of 50 Shades of Grey you read but didn't tell anyone about.
Joel Balsam, AskMen, August 2017
SEE MORE EXAMPLES

Stashing joins a recent crop of buzzwords, like cuffing, that tend to come up in modern dating blogs and articles. Stashing especially refers to when a partner excludes the other from their social media, making it a more relevant term in the era of digital romance.

Are you being #stashed in your relationship? Don't let emotional abusers define your #selfworth: https://t.co/6Tr0D8rtL5 #selfcare #selflove pic.twitter.com/FdqXx0jo0b

Getting stashed? A biological anthropologist explains why the 'stashing' phenomenon happens in #relationships https://t.co/Ycahlc9EZV

Stashers appear less likely to use the word, as the whole point is secrecy (and denial). Stashees, however, may rightly feel aggrieved when they realize they’ve been stashed away from their partner’s wider world.

This is not meant to be a formal definition of stashing like most terms we define on Dictionary.com, but is rather an informal word summary that hopefully touches upon the key aspects of the meaning and usage of stashing that will help our users expand their word mastery.