What does Sunday scaries mean?

The Sunday scaries are the anxieties one experiences on Sunday when thinking about the impending workweek, school week, or other obligations that await in the week ahead. They are especially bad when accompanied by an end-of-the-weekend hangover.

Grumpy Cat, I can’t even, Throwback Thursday, No Pants Day, Case of the Mondays

Where does Sunday scaries come from? 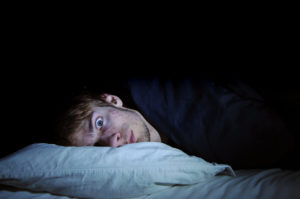 The feeling goes by many different names, including the Sunday blues, shakes, or scaries. It is set off by the nagging dread of–or, more intensely, the panic at the thought of–the work or school week ahead. Scientists attribute the Sunday scaries to anticipatory anxiety.

Urban Dictionary enters the term Sunday scaries in 2009 and a 2013 article suggests it originates in the New York City area. A podcast, The Sunday Scaries, launched in 2014 as “your cure for the Sunday blues.” 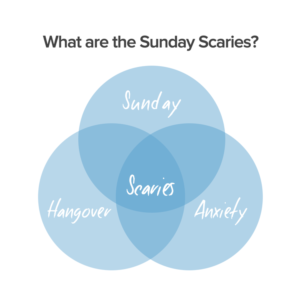 Around this time, the war on the Sunday scaries began. Publications like NBC, MEL, and BuzzFeed featured articles on how to fight off those nagging Sunday scaries. The remedies? Turning off your phone, planning out your week, having a drink, doing some exercise, or watching that trusty old friend, Netflix.

Watching the sun set over the hills while listening to Daniel Caesar to help soothe the Sunday Scaries.
@jamesramseur, October 2018
If you find you're filled with dread come 5 P.M. Sunday like clockwork, you probably have a case of the Sunday scaries. Luckily, there are tools and tricks you can use to make this feeling more manageable. Here are nine ways to stop the Sunday scaries in their tracks.
Kyli Rodriguez-Cayro, Bustle, June 2018 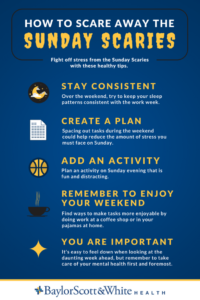 The Sunday scaries has become a go-to social media phrase for businesses to entice customers to come in on Sunday. Popular publications have embraced it, too, in reporting on contemporary work and school culture.

"sunday scaries" is a really cute repackaging of the fact that i wanna die every sunday!!!

Sunday scaries also sometimes refers to the anxiety that sets in after a party-filled weekend.

There’s even a CBD (cannabidiol) oil company called Sunday Scaries. Their cannabis-composed gummies can help some mellow out about Monday.

Got a case of the Sunday scaries? Beat them with these CBD gummies: https://t.co/YilfJ8x6ru pic.twitter.com/yL1RonROIA

This is not meant to be a formal definition of Sunday scaries like most terms we define on Dictionary.com, but is rather an informal word summary that hopefully touches upon the key aspects of the meaning and usage of Sunday scaries that will help our users expand their word mastery.