What does tagged mean?

A person is tagged when they are identified in a post on social media.

A building or wall is tagged when it is marked with the signature of a graffiti artist.

Where does tagged come from? 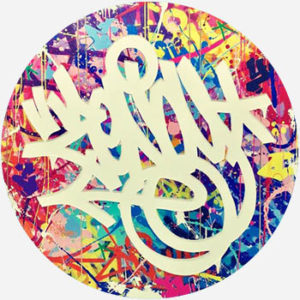 Tagged (past or participial tense of tag) has meant “to mark something” since late Middle English.

In street art, a tag names an artist’s stylized word, symbol, or moniker, occasionally associated with a particular gang affiliation and often impressively colorful and elaborate. Tagging is often credited to a 1960s Philadelphia high-school student who tagged his name on city walls to get a girl. The practice then took off in New York City in the 1970s–80s, when artist Basquiat notably tagged his work with “Samo.” The term grew in the 2000s to characterize the trademark style of a street artist, such as Banksy’s tag, referring to his use of stencils and focus on social commentary.

On social media, tagging began on Facebook in the late 2000s when users would click a button that looked like a gift tag in order to identify a person in a photograph—that person was then tagged in the photo. 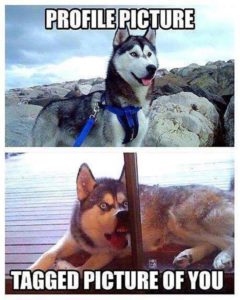 Social-media tagging further spread in the 2010s with the launch of Instagram, where users would tag friends and families in posts by typing the @ sign followed by the username (e.g., @dictionarycom). This was popularized by Twitter and since adopted by Facebook.

Luna posted a picture on Instagram and (accidentally) tagged Hayoung in it...
@apink0419trans, April, 2018
Over the weekend people living off North Villard Avenue say they woke up to signs missing or tagged with spray paint.
Johnathan Hendricks, KPTV, April, 2018
Do I get jealous over Luke?? Nah. Do I get jealous when I see a delicious recipe Gabi tagged Matt in instead of me?[...]Ubetcha
@legallyblond94, April, 2018
SEE MORE EXAMPLES

agged is more familiar when referring to the identification of someone on social media, especially Facebook and Instagram by using the @ sign. Thanks to its use on such platforms, tagging has come to more generally refer to identifying someone in a digital message in order to get their attention or notify them of some matter of interest (e.g., tagging someone in a comment on Google Docs). Tagging, however, is increasingly being replaced by to at or to @ someone. 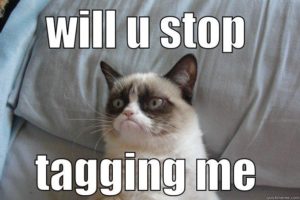 This is not meant to be a formal definition of tagged like most terms we define on Dictionary.com, but is rather an informal word summary that hopefully touches upon the key aspects of the meaning and usage of tagged that will help our users expand their word mastery.