What does tea mean?

Best served piping hot, tea is slang for “gossip,” a juicy scoop, or other personal information.

Where does tea come from? 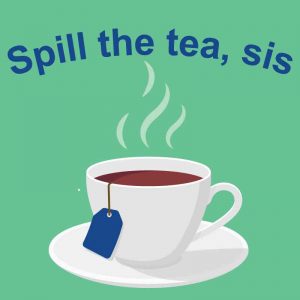 Tea refers to gossip or other private information. As far as we can tell, it was steeped in black drag culture.

One theory connects tea to the celebrated drag performer The Lady Chablis, who is quoted in the 1994 bestseller Midnight in the Garden of Good and Evil: “Yeah, my T. My thing, my business, what’s goin’ on in my life.” T, here, is short for truth.

The slang tea may riff on The Lady Chablis’s T as well as on tea parties, at which well-to-do Southern women are popularly imagined to gossip. The term is especially found in the expression spilling the tea, or dishing out the gossip, associated with black gay slang.

Today on #TheEncore we have @DustyRayBottoms from Ru Paul's Drag race in studio with #FitzyAndBrandz. We will be spilling the tea on what it's like to be an international drag superstar! pic.twitter.com/cVqEZywg5c

Tea spread thanks in part to RuPaul’s Drag Race starting in 2009. The reality show frequently uses (spilling the) tea for “gossip.” Meanwhile, talk show host Wendy Williams, has been known to drink actual tea while spilling some tea on her Wendy Williams Show.

One internet-famous tea-sipper is The Muppets‘s Kermit the Frog. In it, he is smugly taking a sip of Lipton tea and remarking “But that’s none of my business,” used to throw shade. It emerged as early as 2014 and is sometimes used, true to the slang tea, in contexts of gossip. 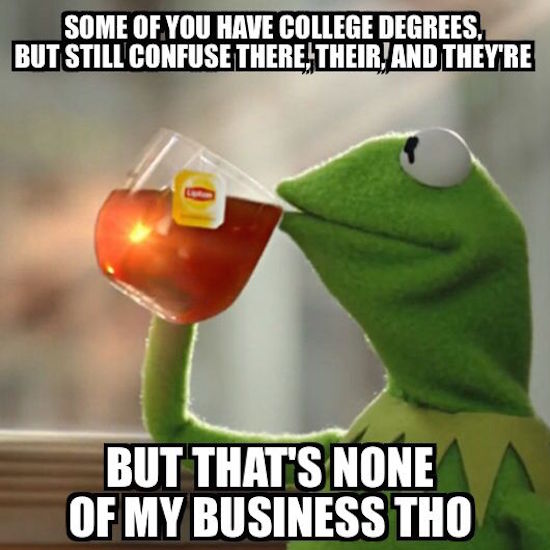 @WinterTheBlizz1, March 2019
East St. Louis may not have the staple food like the overrated Harold’s Chicken (all tea, no shade). However, it was the mom and pop shops from your everyday neighbors, educators and church folks that ensured anyone could have a cooked meal when asked.
Alana Marie, The Root, February 2019 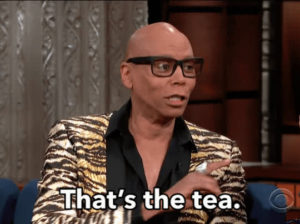 The black gay and drag communities stills love tea, which spread into a more mainstream vernacular thanks to the popularity of RuPaul’s Drag Race.

clean up on aisle 8 cause the tea has been spilled https://t.co/sda5WuJsNT

You can spill the tea like you would use the more common expression spill the beans.

This is the gif I’m going to use when there’s drama. Spill the tea sis I’m ready pic.twitter.com/md0fGYxeto

It’s also common to see tea being used as a reaction to someone revealing some sensational information (e.g., Tea!).

This is not meant to be a formal definition of tea like most terms we define on Dictionary.com, but is rather an informal word summary that hopefully touches upon the key aspects of the meaning and usage of tea that will help our users expand their word mastery.