Feedback
that escalated quick...
the 6

that’s what she said

What does that’s what she said mean?

That’s what she said is a form of innuendo that takes innocent statements out of context and makes them sound lewd or sexual.

Where does that’s what she said come from? 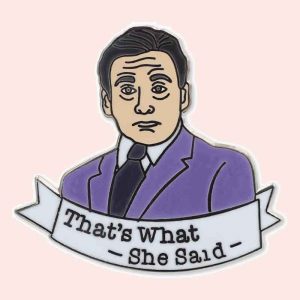 That’s what she said is best illustrated in use. For example, if a person were to comment “It’s not long enough” while trying on an article of clothing, say, someone might respond, “That’s what she said.” Here, the joke imagines a woman lamenting the size of a man’s penis.

While it’s not clear exactly when that’s what she said emerged, it does appear to continue in long tradition of innuendo. It may be based on a form of wordplay known as Wellerisms, named after a character in Charles Dickens’s The Pickwick Papers. Wellerisms make puns out of idioms and cliches for humorous effect, e.g., “’Let’s dig up that body,’ he said gravely.” It may also harken back to a double entendre popular in British English in the early 19th century, e.g., “‘Why don’t you come inside,’ said the actress to the bishop.” Alfred Hitchcock used a variation of the vulgar joke in a test reel for his 1929 film Blackmail, “‘It will not come out right,’ as the girl said to the soldier.” This is popularly cited as the first that’s what she said joke.

That’s what she said appears in print as early as Edmond Addeo and Robert Burger’s 1973 book EgoSpeak: Why No One Listens to You: “The cheapest shot of all, of course, is the ancient one-liner, ‘That’s what she said.’ This reply can be used after virtually any remark, however innocent, and the speaker can summon up some hint of double-entendre.” Its first appearance on TV is popularly credited to comedian Chevy Chase on a 1975 “Weekend Update” skit on Saturday Night Live.

On February 15, 2007, engineering student John Hughes launched an “International That’s What She Said Day” on Facebook, which gained a following of 148,477 fans. In 2012, the phrase was also used as the title of a popular comedy film starring Anne Heche.

Examples of that’s what she said

Who uses that’s what she said?

That’s what she said is a response to when someone makes a comment that could be taken sexually, often as a pun, if viewed outside of the original context. Of course, not every instance of the phrase that what she said, with its common and everyday words, is joking.

That’s what she said is often used to disparage a man, imagining the phrase as something a woman would say about him in bed. Because of this, there are some who view the joke as inherently sexist against women, portraying them only in a sexual light. However, one collection of that’s what she said jokes has called it “the most versatile joke on Earth,” since the joke often is said by women as well as men and is easily used in everyday contexts.

Because of its sexual content, that’s what she said can be offensive and inappropriate, especially in polite and formal settings.

There is also a sex-swapped version of the joke: that’s what he said. Here, the context is flipped, so that it’s something a women’s boyfriend or male lover might say. For example, if one person said about the ocean, “Wow, it’s really wet,” a second person might respond “That’s what he said.” It also works to sexualize comments that might not work with the more common she said motif, such as if someone says, “I keep putting it in the wrong hole.”

The joke’s familiarity, as well as its association with Michael Scott of The Office, means that it is usually viewed as a cheap, unfunny attempt at humor, though others still view the joke as hilarious. Sometimes, the negative perception of the joke is exactly the reason that someone tells one—just as many found Michael Scott’s use of that’s what she said humorous for being so bad, the same holds true for real life references.