they see me rollin

or they see me rollin’

What does they see me rollin mean?

They see me rollin is a meme used to describe unusual or humorous modes of transportation.

Where does they see me rollin come from? 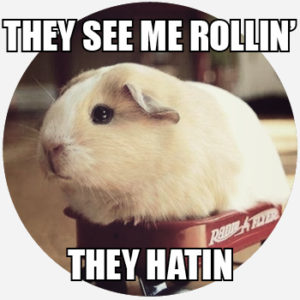 They see me rollin refers to the opening line of rapper Chamillionaire’s 2006 song “Ridin’,” whose opening lyrics are: “They see me rollin’, they hatin’ / patrollin’ and tryna catch me ridin’ dirty.” The song, which described the experience of black drivers being profiled by the police, rose to number one on Billboard’s Hot 100 chart by June 2006.

Shortly after the song’s release, parodies began to appear online. As early as May 2006, a page was created on the meme-sharing website YTMND, pairing the opening of the song with a picture of a child in a wheelchair captioned: “They see me rollin’…They hatin’.” A video posted to YouTube in October of that year played the song with footage of toy cars on a treadmill. Another video posted in May 2007 mixed a picture of a duck with wheels, the subject of a bait-and switch meme known as a duckroll, along with “Ridin’.” That same month, a Twitter user linked to an image of the robot Johnny 5 from the movie Short Circuit captioned, “They see me rollin’. They Hatin.”

Since then, the phrase has been applied to numerous images of unusual or humorous modes of transportation, such as a panda on a go-kart, a grown man in a pink Barbie Jeep, or a cat on top of a turtle. Often the subjects of these images are depicted displaying a confident attitude, similar to the tone of the haters gonna hate meme.

By 2015, the website myinstants.com had added a page that plays the opening lines of “Ridin’” at the touch of a button, allowing people to apply the meme to real life situations. Later that year, Snapchat introduced a filter that allowed users to add an image of Pope Francis in the Popemobile with the caption “They see me Rollin’” for photos taken in locations the Pope was visiting in the US.

Examples of they see me rollin

“they see me rollin / my suitcase... standing outside waiting for the train to nyc. cool breeze, sunshine, kickass.”
@amyhoy Twitter (May 7, 2007)
“The piece of art depicts The Queen riding a hoverboard scooter with three corgis on a lead - which the artist has named 'They see me rollin'.”
Adele Couchman, Kent Live Whitstable’s ‘Banksy’ artist’s new street art imagines the Queen taking an unusual ride (April 4, 2017)
“They see me rollin A district attorney’s office spent almost $1,000 on a zamboni for a ‘drug diversion program’ in Worcester County, Mass.”
Nick Sibilla, “The 14 Most Ridiculous Things Police Bought With Asset Forfeiture,” BuzzFeed (June 24, 2013)
SEE MORE EXAMPLES

Who uses they see me rollin?

They see me rollin is often used as an image caption or a sound clip of Chamillionaire’s original verse in a video. The meme is sometimes used to make fun of wheelchair users who are overweight or disabled. Users also pun on rollin, accompanying the catchphrase with an image of a roll of toilet paper or a joint of marijuana. Others will rewrite Chamillionaire’s lyrics, starting with his opening They see me rollin and then riffing, usually humorously, on the particular way they are rollin.

This is not meant to be a formal definition of they see me rollin like most terms we define on Dictionary.com, but is rather an informal word summary that hopefully touches upon the key aspects of the meaning and usage of they see me rollin that will help our users expand their word mastery.