What does thirst trap mean?

Set a scene, get the right angle, reveal a little thigh, and snap! A thirst trap is a sexy photo posted on social media to attract attention. It can also refer to a person considered sexy—a social-media crush.

Where does thirst trap come from? 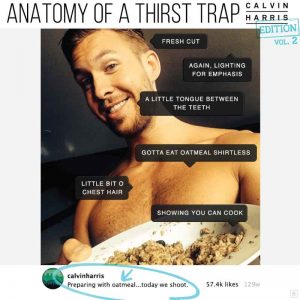 Posting seductive images on social sites like Instagram, where the thirst trap is best known, is nothing new. The name for the practice, though, appears on Twitter and Urban Dictionary by 2011, drawing on thirsty, slang for “thirsting for attention,” and trap in the sense of “lure.”

Emerging from selfie culture, the well-staged thirst trap is a provocative photo, often with a coy or confident caption, that will trap (attract) thirst (attention, in the form of comments, likes, etc.). On Instagram, they are often hashtagged “#ThirstTrapThursdays.” What’s the point of posting if no one is going to notice?

By 2016, thirst traps had become such a thing that popular publications from BuzzFeed to Vibe compiled year-end “Best Thirst Traps” of celebrities, including Drake, LL Cool J, Kim Kardashian, and Serena Williams.

In his 2018 collection, makeup guru Jeffree Star even featured a shade of lipstick he dubbed thirst trap.

you’re not going to get your ex back by posting your thirst traps on social media.
@daarriellee, June, 2018
We need an all around thirst trap goddess. Not just one that twitpics boobs or just ass but both and from different angles
@Vitaminndeee, June, 2012
I literally just did this yesterday in hopes that a guy who ghosted me would notice. So I guess this reveals something important: Thirst trapping is a transparent endeavor. It's a way to get someone's (or everyone's) attention.
Alison Segel, Elite Daily, October, 2017
SEE MORE EXAMPLES

The thirst trap has evolved since its early social days. A thirst trap can refer to a sexy post itself. It can also refer to a good-looking person in general. Everyone from Cardi B to the Canadian Prime Minister have been called thirst traps thanks to their photogenic looks.

To thirst trap is “to post an alluring photo” or “act in an attention-seeking manner.”

Thirst trap can have a positive or negative connotation (e.g., OMG your thirst trap got you so many likes! or That thirst trap was obvious and extra). Thirst traps, which are posted by men and women alike, have a reputation for targeting the attention of a specific person, such as an ex-partner or romantic interest.

As the slang has spread, thirst trap is sometimes used for humorous effect online.

This is not meant to be a formal definition of thirst trap like most terms we define on Dictionary.com, but is rather an informal word summary that hopefully touches upon the key aspects of the meaning and usage of thirst trap that will help our users expand their word mastery.