What does throwing shade mean?

Throwing shade is a subtle way of disrespecting or ridiculing someone verbally or nonverbally.

Where does throwing shade come from? 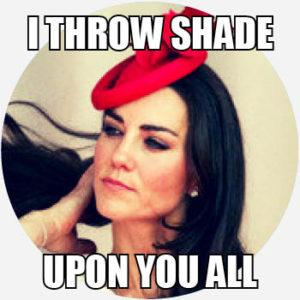 The slang phrase throwing shade is traced back to the 1980s black and Latino gay community, especially the drag scene in New York City. An early instance appears in the 1990 documentary about that drag scene, Paris is Burning. In the film, drag queen Dorian Corey explains how shade emerged as a term for an indirect insult cast (thrown) on a fellow queen: “Shade is, I don’t have to tell you you’re ugly because you know you’re ugly.”

Shade also calls up, and may likely be taken from, the slang adjective shady, characterizing something or someone as “weird” and “dumb” since the 19th century, evolving to “questionable” or “objectionable” in decades since.

While the phrase received some attention in major newspapers in the 1990–2000s, it went mainstream in part thanks to its appearance in 2010 on an episode of RuPaul’s Drag Race involving a fiery exchange of disparagement. Many reviewers discussed the exchange in terms of shade. The term spread further into the public lexicon thanks to its use by major personalities like Ellen DeGeneres and widely read publications such as BuzzFeed and HuffPost.

The popularity of throwing shade, however, has led some critics to charge the mainstream of cultural appropriation from intersectional minority communities.

We could be untouchable as a group if we spent less time bickering & throwing shade and more working and planning towards projects to better those around us.
@MoChunks, February, 2018
To ‘throw shade’ simply means you've said something shady to someone. If you want an example of someone who throws perfect shade in every way, that would be pop star Rihanna. She can shade you with her eyes.
Linette Lopez, Business Insider, March, 2015
The Olympics are supposed to be about unity, togetherness, and a shared sense of friendly competition. But this year, during the 2018 Winter Games Opening Ceremonies, some shade was definitely thrown in a few directions. Take Kim Yo Jong looking at Mike Pence, for instance. The side-eye thrown in the vice president of the United States' direction was as obvious as it was uncomfortable…
Danielle Campoamor, Romper, February, 2018
SEE MORE EXAMPLES

Throwing shade enjoys broad use in colloquial speech and digital communication. The phrase is especially used in internet memes to make light of petty feuds between celebrities, politicians, and other public figures. It is often discussed alongside side eye. One preferred method of throwing shade is via “subtweets” on Twitter. Subtweeting involves subtly criticizing someone without referring to them directly or tagging their username.

As the slang has gained popular currency, shade has become used on its own as a term for the act of a “snub” or “slight.” Shade, in this way, can be a noun or a verb (e.g., to shade someone).

While actually throwing shade can be offensive and can have a negative connotation, the phrase often carries a sense of humor and irony, the affront not to be taken too self-seriously. Online, users often accompany the phrase throwing shade with the New Moon Face emoji 🌚.

A person who throws shade is sometimes playfully referred to as a shade-thrower. The phrase is often intensified as throwing some serious or major shade or other similar constructions.

This is not meant to be a formal definition of throwing shade like most terms we define on Dictionary.com, but is rather an informal word summary that hopefully touches upon the key aspects of the meaning and usage of throwing shade that will help our users expand their word mastery.