Feedback
Timbs
too much sauce

What does Tinderella mean?

A play on words between the classic fairy tale Cinderella and the popular mobile dating app Tinder, a Tinderella is an attractive person on Tinder, particularly one who’s accidentally gotten away. This usually doesn’t involve a glass slipper, but rather an accidental swipe left when using the app.

Tinderella can also refer more generally to any female Tinder user, especially those who use the app religiously, perhaps to the point of obsession, as if a Tinderzilla.

Where does Tinderella come from? 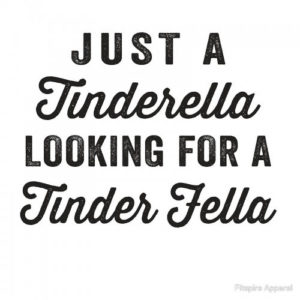 Tinder launched in September 2012, and not long after people took to blending the app name with the romantic fairy tale, Cinderella, at least as Disney told the story. The student newspaper for the University of Illinois at Urbana–Champaign used Tinderella for “female Tinder users” in February 2013 while Tinderella was entered on Urban Dictionary as a “really hot girl” on Tinder in October that year. 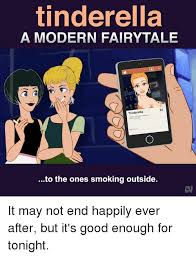 The term Tinderella was popularized, though, in 2014 by an anonymous blogger who went by the name Tinderella and wrote about her adventures in the wild world of Tinder online dating. The blog gained popularity, though apparently not by Tinder’s lawyers, as the blogger received a letter from the company in which they threatened to sue over the name. Unable to take the heat (and likely the millions of dollars in damages), she changed her name to Sinderella.

That same year, the popular comedy site College Humor used the term in their Tinderella: A Modern Fairy Tale video. A spoof on animated Disney movies, the video explores romance in the age of online dating.

2018 saw the case of Claudia, a Tinderella at Missouri State University. The story began when fellow MSU student Hayden Moll accidentally swiped left on Claudia’s Tinder profile. Not knowing her full name, Hayden proceeded to email every girl named Claudia at his university of nearly 23,000 students until he eventually found her. At last, a real life Cinderella story—well maybe, as it’s unclear whether they ever actually went on a date.

Meanwhile our Tinderella resorts to swiping again after being blown out by her current man.
Giselle Wainwright, The Sun, July, 2018
A friend of mine met a guy on Tinder the other day and we met some of his friends tonight and they said to her— “You must be Tinderella.” 😍😍😍 How lame and sappy that I swooned over it.
@jlynnbizzness, August, 2018
My past two exes I met on tinder. Third time is not a charm. I am convinced that only psychos are on there. Kudos to everyone who found their tinderella but I refuse to ever give it another shot. Why am I attracted to weirdos who tell me to kill myself 🙄
@_samjam621, August, 2018
SEE MORE EXAMPLES

Tinderella is largely an online phenomena. It can refer to any woman looking for love (think “fairy-tale ending”) on Tinder or other online dating apps, women who are seen as a bit too eager for love online, or, more generally, to just how hard it is to actually meet someone on Tinder. 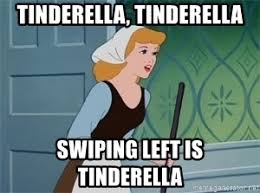 However, people who have had success with Tinder use the term too.

So happy we both swiped right! #seattlefortheweekend #tinderella

This is not meant to be a formal definition of Tinderella like most terms we define on Dictionary.com, but is rather an informal word summary that hopefully touches upon the key aspects of the meaning and usage of Tinderella that will help our users expand their word mastery.