What does truth be told mean?

Truth be told is an expression used when someone reveals a fact or opinion they might otherwise hold back or lie about.

Where does truth be told come from? 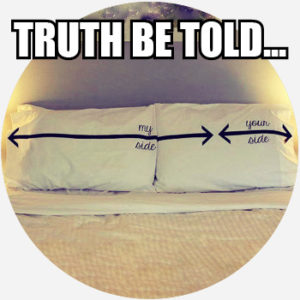 Truth be told is shortened from if truth be told or if the truth be told, evidenced in the written record since the late 16th century. We can find the truncated, and now more common, version since the 1800s. The expression preserves a subjunctive form of the verb to be, implying the speaker would, hypothetically, be more apt to tell the truth under different circumstances.

In the 19th century, truth be told spreads as a stock phrase, moving from more formal and literary uses into colloquial speech and writing, including online. Truth be told has inspired many titles in popular media, ranging from the 2003 album by alt-rockers Blues Traveler and a 2012 documentary about Jehovah’s Witnesses to a 2014 installment in the Jayne Ryland series and a short-lived sitcom on NBC in 2015.

Examples of truth be told

I’ve gotten so much better at saying ‘no’ to people. I always felt like I had to have a good reason but truth be told, you don’t need any reason at all.
@albimakingart, February, 2018
Truth be told, there was no time to think much about what to say. There was work to be done. She needed a tube placed in her lungs to breathe for her.
Jeremy Topin, The Washington Post, May, 2017
Truth be told, not being able to read Chinese in a massively online multiplayer game will probably make menu navigation near impossible, but that doesn't make the game unplayable.
Eric Jou, Kotaku, July, 2013
SEE MORE EXAMPLES

Who uses truth be told?

Truth be told commonly occurs at the beginning of a sentence or utterance, signalling an important, emphatic, or controversial admission from the speaker or writer. In the middle of a statement, truth be told often has parenthetical force, used to contrast a previous idea.

Like its near synonyms to be honest, frankly, or to you the tell truth, truth be told is used for rhetorical effect, enhancing the user’s credibility by creating a sense of intimacy with the audience through the suggestion of a reluctant but honest admission of fact or opinion.

This is not meant to be a formal definition of truth be told like most terms we define on Dictionary.com, but is rather an informal word summary that hopefully touches upon the key aspects of the meaning and usage of truth be told that will help our users expand their word mastery.