Feedback
truther
turn down for what

What does Tumblr girl mean?

A Tumblr girl is a specific kind of young woman that actively uses the social media website Tumblr. Typically, Tumblr girls are considered attractive, are interested in fashion, post many photographs of themselves, and have a distinctive aesthetic sensibility associated with hipsterism.

Where does Tumblr girl come from? 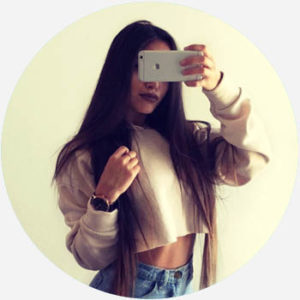 Tumblr is a microblogging platform, founded in 2007. The website makes it especially easy to post photos with short captions. One particular type of Tumblr blogger emerged over the site’s history who has a distinctive look and has come to be called, and stereotyped as, the Tumblr girl. The term was used as early as 2009, though it took a couple years to become more widespread.

Both on and off of Tumblr, there are a few unifying features that describe the Tumblr girl and the personality she’s said to cultivate on her Tumblr page. She’s considered hip and stylish, with a fondness for fashion and often wears t-shirts with witty slogans and high-waisted shorts. She sports styled hair, often ombre dyed or dyed a bright color. And she posts her own photographs, often of herself, rather than simply posting other people’s. Tumblr girls are also often white.

The demographics of Tumblr have historically skewed young, with over half of the website’s users under 35 and about a quarter under 25, according to 2016 data. A majority of users are also female. Tumblr girls reflect this demographic, being more common than their male counterpart, Tumblr boys, who have developed a reputation for their own distinctive style.

“I am determined to become one of those girls that everyone looks up to for theRe [sic] pretty face, I finally feel beautiful, and I’m proud to tell people, a lot has changed about me and I’m finally confident but for now no girls are going to look up to me so I’ll just be a wanna be tumblr girl”
wtfstfuidgaf Tumblr (August 3, 2017)
“my only regret in life is that i was never a tumblr girl with blonde hair and spider lashes that took stupid pictures with an okay camera”
@dinahditch Twitter (March 28, 2017)
“'Cause I'm in love with these Tumblr girls, with skinny waists and drug habits / Pretty faces love status, she acts as if she's the baddest”
G-Eazy, “Tumblr Girls,” These Things Happen (2014)
SEE MORE EXAMPLES

Tumblr girls is often used in a derogatory way outside the website itself. Non-Tumblr users, or even Tumblr users who are outside of the subculture in which Tumblr girls prevail, may view them as being annoying or vain. Musical artist G-Eazy wrote a song in 2014 about his own experience with Tumblr girls. He characterized them as thin, pretty, fun-loving, and confident but also superficial and attention-seeking.

Despite this negative view, many within the subculture feel that a Tumblr girl is a good thing to be. To them, Tumblr girls are attractive, self-assertive, and fashionable. They serve as aspirational figures that other Tumblr users can look up to. Guides on how to be a Tumblr girl or how to be a Tumblr boy detail the specifics of the look and attitude you need to achieve this goal.

Hipster is a related term. Hipsters are said share many characteristics of Tumblr girls, like being trendy in an “unconventional” way. Several fashions have been associated as typical for the two terms, such as flannel shirts and converse sneakers. Sometimes the terms Tumblr hipster and Tumblr boy or girl are used interchangeably. The Tumblr girl may be regarded as being a part of the hipster fashion subculture.

This is not meant to be a formal definition of Tumblr girl like most terms we define on Dictionary.com, but is rather an informal word summary that hopefully touches upon the key aspects of the meaning and usage of Tumblr girl that will help our users expand their word mastery.

truther
turn down for what
Home / Words / Slang / Tumblr girl