What does Twitterstorm mean?

A Twitterstorm is a sudden flurry of activity about a specific topic on Twitter. It is often started by a single person.

Where does Twitterstorm come from? 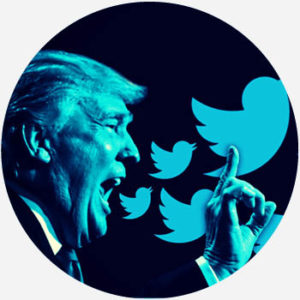 As its name suggests, a Twitterstorm erupts like a storm on the social media network Twitter. The word storm also suggests the spontaneous, unpredictable flurry of activity and interest around a topic, which can feel chaotic and be damaging to persons or brands at the center of the metaphorical storm. The term emerged on the site by 2007 and was in regular use by the media by 2009.

Twitterstorms often begin when one user tweets in anger about a subject, often as triggered by a controversial or insensitive comment by a brand or politician. The response mushrooms into broader outrage on the site as the message gets retweeted and quoted, often catching the attention of media outlets and users with larger numbers of following. At this point, a Twitterstorm may have generated its own hashtag and be considered trending on the site, which can further strengthen the storm. For example, during the 2016 US presidential campaign, when a Trump supporter stated on TV that if Trump didn’t win, there “will be taco trucks on every corner,” it erupted into a flurry of tweets sharing the hashtag #tacotrucksoneverycorner, with most Twitter users mocking the quote by saying that they’d be happy to eat more tacos. This Twitterstorm reached such massive levels that a line of taco trucks protested Trump outside his Las Vegas hotel ahead of a presidential debate and the Arizona Democratic Party put the “taco truck on every corner” phrase up on the marquee of its Phoenix building. Similarly, a furious Twitterstorm broke in response to DiGiorno Pizza after the company accidentally coopted the hashtag #WhyIStayed, a hashtag intended to highlight domestic violence and abuse, for marketing purposes.

While the outrage fueling many Twitterstorms is short-lived, some have shown much more staying power. For example, during a 2016 debate when then-presidential candidate Donald Trump referred to fellow candidate Hillary Clinton as a “nasty woman,” it sparked a rebellious outcry from Twitter users who perceived his comment to be sexist. Other female politicians, such as Senator Elizabeth Warren, seized on this comment, reversing the meaning of Nasty Woman from a misogynistic comment into an anti-Trump feminist slogan. The Twitterstorm soon exploded into a national trend, with the slogan placed on merchandise, including mugs, t-shirts, and pillows.

Twitterstorms are not always centered on controversies, however. Sometimes they are generated for fun, such as when the 2016 release of the movie Captain America: Civil War spurred fans to turn the hashtag #GiveCaptainAmericaABoyfriend into a Twitterstorm, hoping to generate enough attention that Marvel Studios would put the hero in a relationship with his childhood friend, Bucky Barnes.

While Twitterstorms often happen spontaneously when thousands of users rush to tweet about the same subject, they can also be deliberate. In 2017, a host of people planned, scheduled, announced, and launched an intentional Twitterstorm to free Pam Smart, a woman whose supporters felt was wrongly convicted of murder.

A 2011 research report by Precise, a UK-based business information company, identified three types of Twitterstorms based on the relationship between Twitter activity and media response. The first, the “perfect Twitter storm,” is what a Twitterstorm is generally thought of: a surge of posts on a certain topic, leading to a massive media reporting on the storm, such as what happened with #NastyWoman. The second, “storm in a teacup,” happens when a story picks up a relatively small amount of attention on Twitter but gets a lot of attention from the media. This “storm in a teacup” occurred when news media referred to a supposed outrage on Twitter over a series of Kindle advertisements that ran during the fifth series premiere of Downton Abbey, though evidence shows that the annoyed viewers hardly comprised a real Twitterstorm. Finally, “the Twitter-only storm” creates considerable stir on the social network but gets little notice from the media. An example of this is when singer Harry Styles of One Direction fame tweeted about accidentally dropping his sunglasses in the toilet, prompting a Twitterstorm about his eyewear, with posts that continued throughout the year.

“Realising you have gone on the path of a twitterstorm and didn't thread it...”
@Volcanologist, April , 2017
“@scobleizer yeah, just got caught up in the first twitterstorm”
@topa, March, 2007
“SO you may well have seen the Pepsi advert that is getting the online community into a froth of outrage. The likesandshares have been flying. The parody memes have been gathering. The thunderous clouds of this week’s twitterstorm have brewed.”
Ian McQuaid, “View from the Side: The Pepsi Advert Is Really Not the Problem,” The Ransom Note, April, 2017
SEE MORE EXAMPLES

While Twitterstorms can take various shapes and forms, the term is widely associated with collective anger and outrage over a controversial statement made or action taken by a company, politician, or celebrity.

Sometimes Twitterstorm is used to describe a rapid series of tweets posted by a single person in a short timeframe, particularly if these tweets are angry in tone. However, these series—where a user threads together a series of tweets to discuss a topic at greater length than Twitter’s 280-character limit allows—are more commonly called tweetstorms.

This is not meant to be a formal definition of Twitterstorm like most terms we define on Dictionary.com, but is rather an informal word summary that hopefully touches upon the key aspects of the meaning and usage of Twitterstorm that will help our users expand their word mastery.