or ugly-cry or ugly crying face

What does ugly cry mean?

Ugly cry refers to an intense sobbing which contorts the face of the person crying in way that is often perceived as exaggerated or unpleasant.

Where does ugly cry come from? 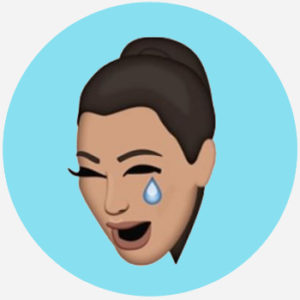 The expression ugly cry emerged by at least the late 1970s. In her 1977 historical novel Hew Against the Grain, Betty Sue Cummings wrote: “For a minute she almost enjoyed the attention till the thought, Oh, it’s true! struck her and pulled her mouth into ugly crying.” That same year, Jon Godden wrote in his novel, Ahmed and the Old Lady: “He was weeping, not his usual easy tears, but a rasping ugly crying that filled her with revulsion…” Oprah Winfrey helped popularize the expression, however, when she described how meeting Mary Tyler Moore made her go “into the ‘ugly cry’” in the early 2000s.

In May 2008, Google searches for the term spiked, corresponding with usage of ugly crying face to describe Kim Kardashian’s face in a May 4, 2008 episode of Keeping Up With the Kardashians. Since then, the term has come to be associated with Kim Kardashian. T-shirts, stickers, and other merchandise have been produced featuring the most popular image of Kardashian crying, a screengrab from the 2012 Kourtney and Kim Take New York finale in which she tearfully discusses her failing relationship.

By 2013, Claire Danes had also become associated with the ugly cry because of her emotional portrayal on Homeland of a CIA analyst struggling with bipolar disorder. The Claire Danes Cry Face Project was started by Brooklyn writer Jessica Hulett in October 2012. The Tumblr page posts images and GIFs of the actress when she cries on screen.

Many listicles offer movies or songs to ugly cry to, a popular context for the term, which also shows its verbal applications. Other popular articles offer advice for covering up the blotchy, red effects of an ugly cry.

“There is NO shame in feeling deeply. Have that ugly cry, be lost, be confused, but address it - and work towards healing and understanding.”
Jorgie Ingram @jorgiewbu Twitter (April 20, 2017)
“A few days later, he found himself ‘ugly crying’ in the Oval Office as Obama gave the White House staff a pep talk about President Donald Trump’s stunning victory.”
Rachel Stoltzfoos, “‘Breathing Exercises’ In The Rose Garden Got The White House Through Election Night,” The Daily Caller (January 21, 2017)
“Shrill screams. Shocked silence. The ugly cry. You never know how people will react when they're surprised by their favorite celebrities, generous gifts or long-lost loved ones.”
“Memorable Viewer Surprises,” Oprah.com (September 9, 2009)
SEE MORE EXAMPLES

Ugly cry is most often used to refer to women, and can have sexist overtones, implying that an intense emotional response is unattractive. Some writers, such as Rachel Vorona Cote for New Republic, have espoused the subversive power of the ugly cry in its contrast a more traditionally demure feminine crying depicted in classic art and literature. As Cote argues, “The hysterical woman’s power—for power she does possess—lies in her refusal to cry inside the lines, and from her dismissal of a westernized emotional doctrine that condemns passion as excess.”

As noted, ugly cry can be used as a noun (an ugly cry), verb (to ugly cry), or modifier (ugly-crying face).

This is not meant to be a formal definition of ugly cry like most terms we define on Dictionary.com, but is rather an informal word summary that hopefully touches upon the key aspects of the meaning and usage of ugly cry that will help our users expand their word mastery.