A blend of vague and Facebooking, vaguebooking is the practice of making a post on social media, primarily Facebook, that is intentionally vague but highly personal and emotional. Designed to elicit concerned responses from friends and family, it’s often looked down upon as a desperate call for attention or need for validation.

Where does vaguebooking come from? 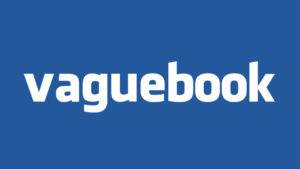 Appearing as early as 2009 on Urban Dictionary and a blog called Kryson’s Kreations, vaguebooking refers to a post that is cryptic but also alarming such that it prompts outreach from friends and family. The practice initially began on Facebook but has since spread to other social media platforms. 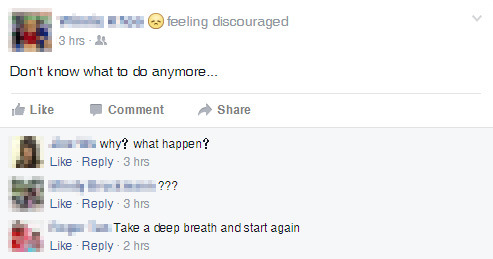 In response to the vaguebooking phenomena, many videos have circulated the internet of people venting their anger about how annoying, immature, and attention-seeking they find the practice. One such rant in 2018 by YouTuber Heather Land notably received over 300,000 views.

While people may like to poke fun at those who engage in vaguebooking, it may not be all fun and games. In #storyofmylife: Personality Characteristics Associated With Attention Seeking Behavior Online and Social Media Use in Emerging Adulthood, a 2014 thesis completed at the University of Southern Florida by Chloe Berryman, there was a correlation between vaguebooking and suicidal thoughts, loneliness, social anxiety and decreased empathy in 471 young adults studied.

Vaguebooking is the click bait of social media.
@bicyclefish, November 2018
So why do people do it? To find out, I sent a very to-the-point tweet inviting people to talk me through the thought process. Diana Villegas, a PR manager living in Hamburg, Germany, reaches out to confess to me that she’s been guilty of vaguebooking in the past. For Diana, it was about letting [off] steam.
Kathryn Wheeler, Happiful, January 2018 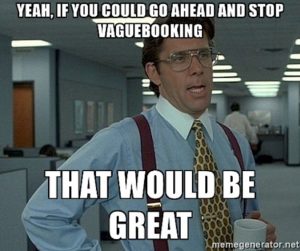 Many people online loathe vaguebooking—and they’re not quiet about it. On platforms like Twitter, it’s not uncommon to see posts taking a stab at the practice, which many feel has become too prevalent. 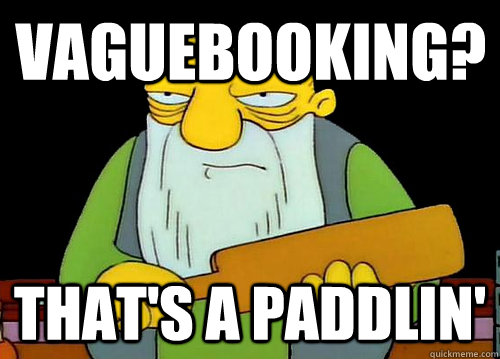 There are also those who reference vaguebooking while engaging in vaguebooking, as if stave off the haters.

I know vaguebooking is annoying, but sometimes you gotta.

Gonna be crossing something off my bucket list in a few months. Couldn't be more gleeful about it.

This is not meant to be a formal definition of vaguebooking like most terms we define on Dictionary.com, but is rather an informal word summary that hopefully touches upon the key aspects of the meaning and usage of vaguebooking that will help our users expand their word mastery.