Vajazzling refers to when a woman covers her pubic area with decorative flourishes, such as gemstones, rhinestones, or glitter.

Where does vajazzle come from? 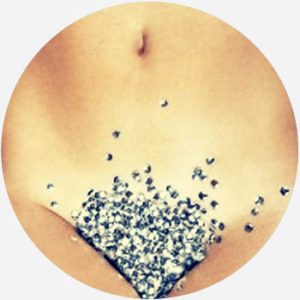 The term received a mainstream popularity boost when it was mentioned by actress and author Jennifer Love Hewitt in January 2010. Hewitt was giving an interview on Lopez Tonight to promote her most recent book and mentioned that she devoted an entire chapter to vaginal decoration, saying “After a breakup, a friend of mine Swarovski-crystalled my precious lady…It shined like a disco ball so I have a whole chapter in there on how women should vajazzle their vajayjays.”

Vajayjay is another term for a vagina, popularized by the TV drama Grey’s Anatomy in 2007 after ABC refused to allow the word vagina to be spoken more than a certain number of times on-air.

After Hewitt spoke about the practice, it became a subject of public fascination, with polls conducted among men as to their pro- or anti-vajazzle stance and some journalists going for an experimental vajazzling just to write about the experience firsthand.

“Move over TOWIE, Tesco's are now giving their products vajazzle! #Tesco #TOWIE #eastereggs #chocolate #Rainbow #unicorn #Vajazzle”
Sarah Louise @londongirltv Twitter (March 4, 2017)
“Just when you think you’re running out of things to blog about… your friend posts an informative link to the wonderful world of vajazzling. Va-what? You got it…. the art of bedazzling the vaginal area, which for the official record isn’t entirely anatomically accurate, as the glitz is actually stuck to the mons pubis and in some instances the labia.”
Gina Fenton, “Va- what??” Extreme Mom (June 10, 2014)
“I had to watch the subsequent video to see what exactly a Vajazzled vagina was. Turns out, they bedazzle your freshly waxed nether regions adorning it with sparkling Swarvorski crystals in your choice of shapes, designs, initials or even mark it in his name!”
Erica, “Would You Vajazzle Your Vagina For Your Wedding?” Inked Weddings (June 9, 2014)
SEE MORE EXAMPLES

The word vajazzle is used when describing the process itself. Vajazzling is an activity some women partake in for special occasions, such as birthdays, weddings, and anniversaries.

However, the term also comes up during discussions of body art trends and methods, often in reference to new and (subjectively) unnecessary forms of body and genital decoration. It can also be used to mockingly refer to any object that’s been over-decorated with shiny trimmings.

This is not meant to be a formal definition of vajazzle like most terms we define on Dictionary.com, but is rather an informal word summary that hopefully touches upon the key aspects of the meaning and usage of vajazzle that will help our users expand their word mastery.