What does wenis mean?

Wenis and wagina are joke words for referring to the skin on the outside and the pit of the elbow, respectively.

Where does wenis come from? 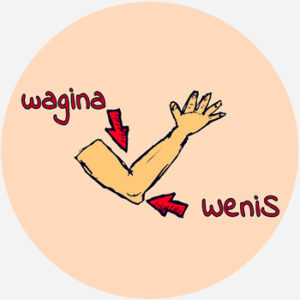 While the exact origins of wenis and wagina are unknown, they likely originated as children’s or adolescent slang by the 1990s. The terms have been have been circulating on the internet since at least the early 2000s.

The actual area of the elbow which wenis often refers to can be called the olecranal skin, the wagina the cubital or antecubital fossa.

The wenis component of this phrase is not always used in reference to the elbow. A 1998 episode of the TV sketch comedy Mr. Show with Bob and David was titled “Show Me Your Weenis!” In this episode weenis, spelled with two es, is used as a silly blend of wiener and penis.

“It's like the newest discovery of weird words people use. Is it for online use only or people actually use wenis and wagina in real life.”
Angel @HarukaRyuumaou Twitter (March 23, 2015)
“Today I found out the skin on your elbow is called a wenis, so I told my dad and he said ‘Is the top part called a wagina..’ ”
@abbrielle_hill Twitter (November 19, 2016)
“That isn’t true…right? Because having my friend go around saying, ‘I’M GOING TO STROKE YOUR WENIS’ isn’t the most awesome thing to hear in the hallways.”
Dr. Cranquis’ Mumbled Gripes (October 21, 2011)
SEE MORE EXAMPLES

The humor of wenis and wagina, more prevalent as an in-joke among middle-school-aged or adolescent speakers, is threefold. First, the two words sound like penis and vagina, mild taboo words or topics for younger speakers. Second, children and young adults might use the words to test boundaries before authority figures. Finally, speakers may use wenis and wagina to take advantage of the gullibility of their peers, e.g., “Your wenis is showing.”

Wenis is more widespread than wagina. Some users will informally refer to the tip of their elbow as their wenis. For instance, if someone accidentally bangs their elbow, they might cry out, “I hurt my wenis!” Wenis and wagina may also be used as insults.

A related term is cagina, a slang term for the skin between the thumb and the index finger. However this is widely recognized as being “made up” or “fake” by people on social media and online forums.

This is not meant to be a formal definition of wenis like most terms we define on Dictionary.com, but is rather an informal word summary that hopefully touches upon the key aspects of the meaning and usage of wenis that will help our users expand their word mastery.