What does Why so serious? mean?

Why so serious? is a famous line from the movie The Dark Knight. Spoken by the villainous Joker, it plays on his clownish appearance and cheerful demeanor, which stays in place even while he does violent or gruesome things.

Why so serious? has also become a popular meme, usually paired with images of the Joker.

Why so serious? is also an English phrase that’s usually said to a somber person in a joyful setting. In this last case, it has a more sincere meaning than the meme.

Where does Why so serious? come from? 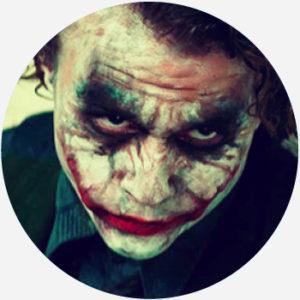 In May 2007, more than a year before the release of The Dark Knight, 42 Entertainment launched an advertising campaign for the movie that essentially created an alternate reality based on the film. A reference to the Joker’s line from the still-unseen movie, WhySoSerious.com was a website full of interactive messages and images that revealed clues about the Joker, Gotham City, and other elements of the movie’s universe. Fans were encouraged to continue this “scavenger hunt” across numerous websites and even to some physical locations, compiling a large network of the information they found. Many of them also dressed up as the Joker and posted their pictures online.

When The Dark Knight was released in 2008, it was hugely successful, with much praise focused on Heath Ledger’s performance as the Joker, with added attention after Ledger’s tragic death before the movie’s premiere. The line “Why so serious?” was already well-known from the ad campaign, and became further established as the Joker’s catchphrase with the release of the movie.

Examples of Why so serious?

“Goodbye, my old friend #BM #artist #thejoker #joker #dccomics#dc #smile #whysoserious #greenhair#costumed”
Joaquín Lazo blondmorgan Instagram (May 6, 2017)
“I lmao at some of the comments people post on the news posts on fb why so serious?!”
Anndie @_xoxoannders Twitter (April 3, 2015)
“It's ironic that a player who calls himself the Dark Knight is one of the main reasons we have to ask opposing fans a question made famous by Heath Ledger's Clown Prince of Thieves. Batman supporters uttering the question 'Why so serious?' seems like borderline heresy, but it's one Panther fans have been asking a lot lately.”
DBelt, “Panthers to NFL Fans: Why So Serious?” Cat Scratch Reader (Feb 4, 2016)
SEE MORE EXAMPLES

Who uses Why so serious??

The phrase coupled with an image of Ledger in costume became a well-known meme even before the release of the movie. People would dress up as the Joker or photoshop his distinctive makeup on the faces of celebrities or animals, then pair the image with Why so serious? Sometimes the phrase is rendered Y so srs? (especially in the context of LOLcats or funny animal pictures).

As a meme, Why so serious? is generally used as a response on social media when someone is seen to be overly upset or earnest about something. It’s the equivalent of telling a person to “calm down” or “chill out.” The meme is usually meant to be read in a sarcastic, or prodding way.

Similarly, the phrase Why so serious? can be applied in everyday life to a person whose attitude is overly serious for the occasion, e.g., “Can’t you snap out of your funk and enjoy the carnival? Why so serious?” It can also be used sarcastically toward someone who is inappropriately cheerful in a serious setting, e.g., “I just heard you laughing during the funeral. Why so serious?”

This is not meant to be a formal definition of Why so serious? like most terms we define on Dictionary.com, but is rather an informal word summary that hopefully touches upon the key aspects of the meaning and usage of Why so serious? that will help our users expand their word mastery.