Feedback
would you look at th...
wypipologist

What does Would you rather mean?

Would you rather refers to a game where participants must choose between two challenging scenarios and explain why.

Where does Would you rather come from? 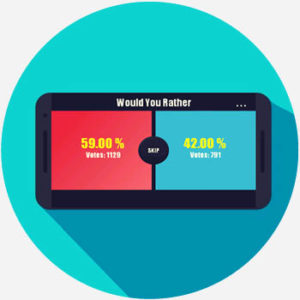 In the 1960s, Would you rather appears in psychological studies of motivation as a stock question asking a respondent to pick between two, fixed options. Evidence for the Would you rather game as such comes in the 1970s, used in a study of aggressive behavior in children. By the 2000s, Would you rather was well-established as a conversational or party game, with various popular books compiling different Would you rather questions for adults and children to play alike.

To play the game, a person has to address a dilemma, usually between two very appealing, unpleasant, or otherwise tricky choices:

Then, participants have to say which they would rather (or “prefer”) do and why. Choosing both or neither is discouraged—the point is that participants are forced to pick one, resulting in humorous or engaging discussion about why.

Would you rather was developed into a formal board game in the early 2000s, with subsequent editions. In the 2000–10s, the TV cartoon Family Guy regularly featured characters playing the game, often as as vehicle for outrageous scenarios (e.g., Would you rather be a hobo with a 5% chance of getting inherited by a rich guy or be Hitler two years before the end of WWII)?

In 2011, Irish comedian Graham Norton hosted a TV  show based on the game for BBC America, called Would You Rather…? with Graham Norton, with celebrity panelists comically competing for points by answering would you rather questions. Would you rather became a popular meme on social media after the launch of the app Either in 2012, which allows users to poll people on their preferences and displays their results in an eye-catching way. Screenshots of the results of the app’s would you rather questions circulated on Reddit and other social-media platforms in early 2013.

In March, 2018, social-media platform Snapchat caused outcry for running an ad for a game it called Would You Rather, asking people if they would rather slap Rihanna or punch Chris Brown, a troubling joke about Brown’s domestic violence against Rihanna. Snapchat quickly took down the ad.

Examples of Would you rather

Who uses Would you rather? 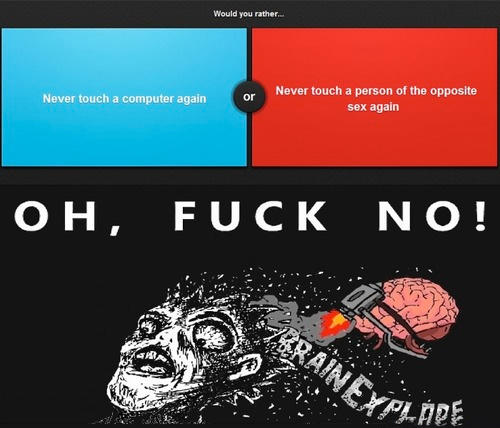 This is not meant to be a formal definition of Would you rather like most terms we define on Dictionary.com, but is rather an informal word summary that hopefully touches upon the key aspects of the meaning and usage of Would you rather that will help our users expand their word mastery.

would you look at th...
wypipologist
Home / Words / Slang / Would you rather