What does xenomorph mean?

A xenomorph is a type of alien from the science-fiction horror franchise Alien known for its grotesque appearance and parasitic form of reproduction.

Where does xenomorph come from? 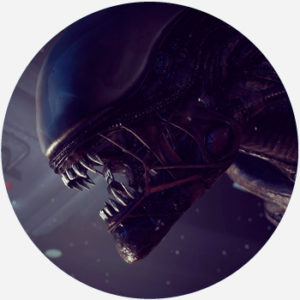 The aliens in the Alien franchise are known for their ability to implant eggs in other species, which later hatch and burst out of the host’s chest, taking on characteristics of the host’s form. Their appearance—like a grisly cross between a giant scorpion and a dragon with a long, oblong head and a sharp-toothed mouth within a mouth—was designed by Swiss surrealist artist H.R. Giger, based on a piece of art from his book Necronomicon.

The specific name xenomorph comes from Aliens, the 1986 sequel to the 1979 Alien. The film has a passing reference to the alien species as xenomorphs. The word derives from the Greek xenos, meaning “stranger” or “foreigner,” and morph(ḗ), meaning “form.” A xenomorph, then, can be taken as an “alien-shaped thing.”

Some fans have complained that xenomorph isn’t really the name of the species, just a fancy word for “alien.” The word xenomorph isn’t used often in relation to the species within the films. Instead, they’re usually just called “aliens,” “things,” “them,” or “it.” Regardless of the creators’ original intentions or the objections of some fans, the name xenomorph has shown staying power. News coverage of additions to the Alien series, like 2017’s Alien: Covenant, refers to the aliens as xenomorphs.

“I don't get it, I've been forgetting to take hormones regularly but my chest is just bursting these days and not in the xenomorph sense”
cyrus’s lamp @BootlegGirl Twitter (April 6, 2017)
“It's weird. I could never explain it to anyone other than it was the weirdest sensation ever and I honestly always thought of a xenomorph too lol.”
Raiyen Reddit (October 10, 2014)
“I do strive and push myself to create something like H.R [sic] Giger's ‘Xenomorph.’ Which in my opinion is something so terrifying, yet beautiful.”
Pauline King Shannon (Pooks), Random Thoughts of an Alien Goddess (2014)
SEE MORE EXAMPLES

Xenomorphs are also called facehuggers or chestbursters for their rather unusual method of propagation. Some fans refer to these as different stages in the life cycle of the xenomorph.

Although the most common use of xenomorph is in reference to the Alien species, it also has other, unrelated applications. For instance, there is a database management software called Xenomorph. Xenomorph, a synonym for allotriomorphic, is also a technical term in geology, referring to a mineral that doesn’t have a regular shape of its own.

This is not meant to be a formal definition of xenomorph like most terms we define on Dictionary.com, but is rather an informal word summary that hopefully touches upon the key aspects of the meaning and usage of xenomorph that will help our users expand their word mastery.