What does yuge mean?

Yuge is the pronunciation of the word huge in a New York accent. The term is closely associated with Donald Trump … because he says it a lot.

Where does yuge come from? 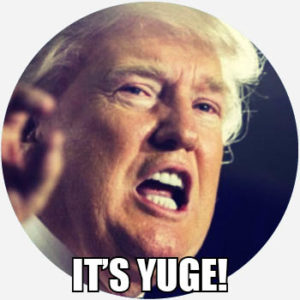 Yuge rose to prominence in late 2015 during the 2016 US presidential campaign, which featured two candidates originally from New York City: Donald Trump (Queens) and Bernie Sanders (Brooklyn). Both candidates drew attention during the campaign for the pronunciation of huge as yuge.

In the New York accent, among others, words beginning with an initial hyu sound, like huge, are reduced to the simple y. Other examples include human, said like yuman, or humiliated, treated like yumiliated. 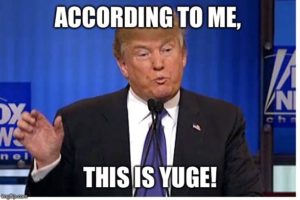 Trump’s use of yuge proved particularly notable because he boasted about personal accomplishments (how he “built a yuge company”) often. Trump used yuge throughout his campaign: during television interviews (“I’m a yuge second amendment person”), stump speeches (“New Hampshire has a yuge heroin problem”), and in presidential debates (“We have to get very tough on cyber warfare. It is a yuge problem.”)

Liver took a yuge L this weekend #wholelottagangshit
@BSchimcek, May, 2018
The fact that Rick Gates is pleading guilty to just 2 of over 30 counts, shows that he has a boatload of incriminating evidence against others. No prosecutor would let anyone off this easy unless he knows he can catch the YUGE fish if he does. And I mean YUGE!
@EdKrassen, February, 2018
The financial community, on the other hand, has been overtly positive in its assessment of the president, thanks in part to his big, yuge tax cut
Bess Lavin, Vanity Fair, January, 2018
SEE MORE EXAMPLES

In popular speech and writing, yuge has become a shorthand for mocking or cheering for Donald Trump. Trump’s notoriety has made yuge an international punchline. It’s used humorously to exaggerate the size and grandeur of an object or idea. This is typically done while mimicking Donald Trump’s style of speaking. 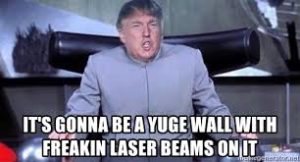 Yuge has also been embraced by some conservative publications and Donald Trump supporters, used as an affectionate allusion to him when describing something massive.

This is not meant to be a formal definition of yuge like most terms we define on Dictionary.com, but is rather an informal word summary that hopefully touches upon the key aspects of the meaning and usage of yuge that will help our users expand their word mastery.