What does Zerg rush mean?

Zerg rush is an attack strategy that involves overwhelming an opponent with large numbers or ganging up on someone.

Where does Zerg rush come from? 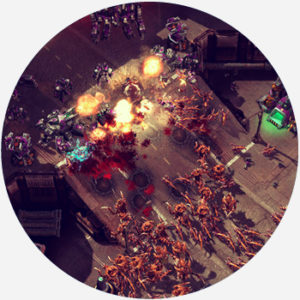 The term Zerg rush originates from the 1998 Blizzard video game StarCraft and its sequels. This real-time strategy game allows players to control one of a handful of alien races, including humans, with the goal of colonizing the same sector, and driving out the other races. The Zerg are a species of insectoid aliens possessing a collective consciousness. Despite their relative weakness as individual units, they can rapidly spawn new units, making each individual disposable. This allows the Zerg to swarm their opponents with overwhelming numbers to achieve easy victories, a tactic that is called zerging and is often looked down upon.

The violent onslaught itself, however, has come to be called a Zerg rush, and has become a familiar term in other game franchises as well. The success of a Zerg rush is based on creating as many low-level units as possible, and then attacking one’s opponent quickly, before that opponent has a chance to properly prepare. If executed fast enough, a Zerg rush can be a devastating maneuver.

The most common origin story behind Zerg rush is that it began during a multiplayer battle between two Korean StarCraft players. When one player swarmed the other with overwhelming numbers, the victim apparently typed “OMG ZERG RUSH,” and the other players responded with “KEKEKEKE,” which is the Korean equivalent to “LOLOLOL.” When pronounced aloud, this sounds similar to the noise that the Zerg characters make during their attack.

Zerg rush became a popular meme, with many images and videos referencing it. In 2012 Google programmed a real-life Zerg rush into its search engine. When users search for Zerg rush, it results in a legion of letter Os from the word Google at the top of the page breaking free. These Os rapidly devour every result on the search page, leaving it blank. The Os then gather together to produce a giant “GG,” which is a popular shortienng of good game among online gamers.

“When they're about to haul off the nacho stand and everybody does a Zerg Rush”
Omar L. Gallaga @omarg Twitter (March 14, 2017)
“For the uninitiated, ‘Zerg Rush’ is a term used by players in the game wherein the strategy involves creating as many units as possible in a quick amount of time in order to attack your opponents before they can fully mobilize. As seen in the video below, it’s an effective strategy for attacking not only bases but farm houses.”
Spencer Perry, “Prepare for The Rush in StarCraft Fan Film,” ComingSoon.net (June 24, 2015)
“As legend has it, the meme originated during a multiplayer match when one player launched a Zerg rush attack against an unprepared opponent who exclaimed ‘OMG ZERG RUSH,’ much to the delight of the other players.”
Grant Pardee, “The weird origin of Zerg Rush, Google’s best Easter Egg,” The Daily Dot (January 29, 2017)
SEE MORE EXAMPLES

The use of Zerg rush is most popular among gamers when referring to the play tactic in question. Among these gamers, it is sometimes shortened to rush.

In addition to its use in games, the internet is filled with Zerg rush memes. These are generally in the form of images or videos, in which enormous armies of humans, bombs, aliens, ants, or anything else gangs up on a single person or thing.

In everyday use, a Zerg rush can also be used to refer to any situation in which one person is ganged up on by a vastly superior number of opponents. For example, if a person in a social gathering expresses an opinion that the rest of the group disagrees with (say, he thinks blue is the best color, and everyone else likes red), and the majority immediately gangs up on that person, that scene could be described as a Zerg rush. If one posts something on a social network and is immediately overwhelmed by negative comments, as often happens with political posts, this can also be called a Zerg rush.

This is not meant to be a formal definition of Zerg rush like most terms we define on Dictionary.com, but is rather an informal word summary that hopefully touches upon the key aspects of the meaning and usage of Zerg rush that will help our users expand their word mastery.