What does zoomer mean?

Where does zoomer come from? 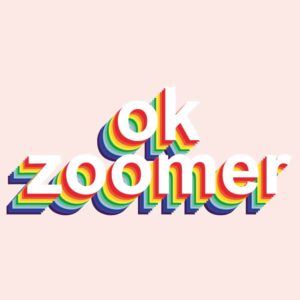 While there are earlier, unrelated slang meanings of zoomer, the word zoomer, for a member of Generation Z, blends that Z with boomer. A boomer is a member of the Baby Boom Generation, referring to the post-World War II boom in births especially between 1946–64. 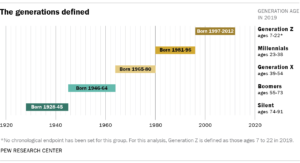 Just as zoomer is modeled on boomer, Generation Z is modeled on the terms Generation X (roughly between 1966—80) and Generation Y, who are better known as millennials (born in the 1980–90s). It’s been recorded since at least 2016.

People might have come up with zoomer because of the more tongue- and keyboard-twisting likes of Gen Z-er? Gen-Zee-er? Gen-zer? Gen-zed-er? Zoomer may just be easier to pronounce. It also cleverly plays on the verb zoom.

Zoomers make up a large and diverse young population, about 27% of the US by some estimates. Popularly, zoomers are associated with use of digital technology and social media, having progressive and inclusive viewpoints, and being concerned about the future, especially climate change.

The best part about being a Zoomer with Millenial professors is that every syllabus day is met with the caveat, "You have three unexcused abscenes, so if you're sick, or just too sad to come to class, let me know." [sic]
@jackson_roberg, January 2020
In general, Zoomers are progressive and more socially conscious when it comes to issues of race, gender, identity and climate change. They’re showing more awareness than their elders before them—and instead of looking up, they’re turning to each other for guidance.
Joshua Graham, Vogue (UK), November 2019

Zoomer can be used neutrally to refer to a member of Generation Z, especially when referring to large social trends.

Zoomer if the US has been at war for your entire life https://t.co/omrpvCi0wZ

But, zoomer is also very often used with an ironic, humorous, or even mocking tone, a lot of the times in reference to (or as pitted against) members of other generations. That’s because, on social media, referring to generations is frequently less about specific age groups and more about characteristics and attitudes of associated with social groups. Some people like to claim zoomers are addicted to social media and are too sensitive—along with other complaints that often target youth.

boomer boss: “we think of our business as like a family”

millennial boss: “we think of our business as like a giant polycule”

zoomer boss: “we think of our business as like an anime death cult”

There are two notable zoomer memes. One is OK zoomer, which riffs on the viral OK boomer and is often used to call out or dismiss a young person in some way, often ironically.

The other zoomer originates as a young male character stereotyped for his online activity, music and gaming tastes, and dancing styles. It involves an edit of a so-called Wojak character with pointy, side-shaven hair and round glasses, often looking highly distressed. This zoomer is often portrayed as being upset by the things around him that don’t fit his tastes or perceptions. 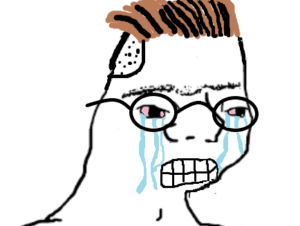 Occasionally, zoomer has referred to a really zippy and energetic (zoom-y) boomer. This use appears to be fading, but it still exists in some older media from the 2000s, so be aware. Also be mindful that zoomer may be used in other contexts, too, from the name of a media company … to British slang for breasts.

This is not meant to be a formal definition of zoomer like most terms we define on Dictionary.com, but is rather an informal word summary that hopefully touches upon the key aspects of the meaning and usage of zoomer that will help our users expand their word mastery.