What does apex predator mean?

In the natural sciences, an apex predator is a predator that exists at the very top of the food chain. Unlike some other predators, it’s never preyed upon itself. Examples include polar bears, lions, crocodiles, and orcas.

Where does apex predator come from? 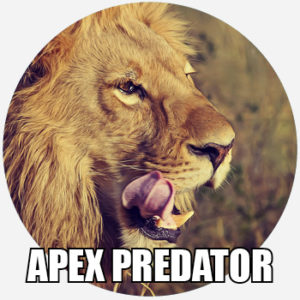 The term apex predator has existed since at least the early 1970s, when they were discussed in reports about marine life as something distinct from ordinary predators. But, why not just call them predators or top predators and be done with it? Like actual apex predators have a certain role in nature, the word itself occupies a particular linguistic niche. In this context, apex means something close to a summit or peak.

This makes more sense if you visualize an ecosystem as a pyramid that sorts organisms into a tiered system. In this theoretical pyramid, each tier contains a grouping of animals that eats the animals in the tier below them. Within the constraints of this model, the apex predator would be at the very top. Able to eat other organisms, but never eaten itself.

The phrase is typically referenced in scientific literature and news articles since it’s fairly technical language. Much of this discussion revolves around concerns about the environment. A common line of inquiry is how apex predators affect their environment and vice versa.

Apex predators have a very important role in some ecosystems. Because they’re never preyed upon, they have a role in maintaining the populations of the other organisms in their domain. Other predators and their prey might have an unbalanced dynamic where only the predator may remove some prey animals from the population. Certain prey animals, such as deer, might also run rampant without an apex predator to regulate their population. They are a keystone species: without them, the whole system would collapse.

Another popular topic of debate is whether or not humans would be considered apex predators, since as a species, we have been effectively removed from the natural order of the food chain. There hasn’t been a conclusive answer yet. Other uses of apex predator include references by analogy. Human beings are often compared to apex predators, usually for the sake of showing dominance over other people or over other species (like when humans hunt other so-called apex predators for sport).

This is not meant to be a formal definition of apex predator like most terms we define on Dictionary.com, but is rather an informal word summary that hopefully touches upon the key aspects of the meaning and usage of apex predator that will help our users expand their word mastery.