What does CryptoKitties mean?

CryptoKitties is a virtual reality game, made with blockchain technology, where the user can buy, breed, and sell adorable cartoon cats.

Where does CryptoKitties come from? 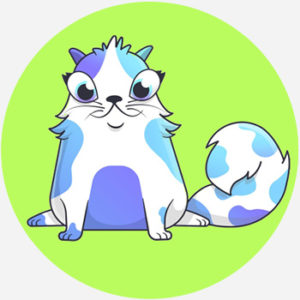 The open-source and decentralized blockchain technology blossomed in the 2010s, especially thanks to Bitcoin. Another popular blockchain platform is Ethereum.

Similarly to Bitcoin, Ethereum uses its own digital cryptocurrency, known as ether or ETH. As both blockchain technology and cryptocurrency can be difficult to understand, the innovation studio Axiom Zen decided to make it more user-friendly (and profitable) by deploying blockchain in an online game. They released this game, called CryptoKitties, on November 28, 2017. It was an overnight sensation.

CryptoKitties incorporates blockchain technology in that players can use their ether currency to purchase cute little digital cats. Players can then breed different types of CryptoKitty species together, with each cat possessing its own “DNA” on a specific part of the blockchain. There are four billion possible cat breed combinations, based on traits like fur color and style of whiskers, and certain traits are seen as more desirable in the world of the game.

CryptoKitties relies on the core principles of husbandry, but since it’s digital, the cats are not limited to reality and can possess the traits of dragons or vampires, for example, creating a lot more variety. Though the median price of an average CryptoKitty is around $25, some breeds have sold for over $100,000.

@Snowden doesn’t want you to send him a #cryptokitty. #BlockstackBerlin
@nickfogle, March, 2018
Business Insider reported that when the Beanie Baby bubble of the nineties burst, most collectors were just fine. But there still isn't really much of a market for most of the toys...But for now, Cryptokitties will continue breeding.
Áine Cain, Business Insider, January, 2018
Loving my @CryptoKitties KnightKitty. The Bio immortalizing my name is more then I ever expected when I started taking part in this community. If you like something get involved and good things happen.
@PsycheoutDota, February, 2018
SEE MORE EXAMPLES

CryptoKitties is used as both the name of the game and the name of the animals in the game. An individual cat is called a CryptoKitty. Players sometimes name their cats (and give them bios) after the style of the game’s name (e.g., VampKitty for a cat with vampire traits).

Outside of gameplay, CryptoKitties is often referenced in business, technology, and mainstream news media in discussions of the spread of blockchain technology and its cultural and financial potential and implications.

This is not meant to be a formal definition of CryptoKitties like most terms we define on Dictionary.com, but is rather an informal word summary that hopefully touches upon the key aspects of the meaning and usage of CryptoKitties that will help our users expand their word mastery.