What does GNews mean?

GNews is a news notification program for the Google Chrome internet browser.

It was also a punning catchphrase of a wildebeest (gnu) character from a 1980s TV puppet show.

Where does GNews come from? 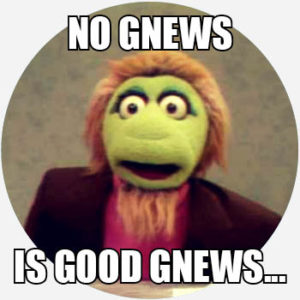 GNews was launched in 2012 as an extension—a special, customizable app—on Chrome, Google’s internet browser. GNews now provides screen notifications from Google News, the company’s widely used news aggregator, of top headlines as they are published. The G stands for Google, but GNews is itself technically not an abbreviation for the larger service, Google News; it is simply the name for the Chrome extension.

Unrelated to GNews is gnews, seen in the early 1980s children’s TV program, The Great Space Coaster. On the show, Gary the Gnu was a puppet, wildebeest (which is also called a gnu), TV-news anchor. He was known for his catchphrase punning on his profession and species: “No Gnews is Good Gnews with Gary Gnu.”

GNews is primarily used in online writing to refer to the Chrome extension or in links to articles from the GNews app.

Gary the Gnu’s gnews is occasionally referenced in nostalgic discussions of the puppet show and of the early 1980s more generally. Some people have taken to typing no gnews is good gnews in playful allusion to Gary the Gnu when, say, reporting on some personal matter.

Donald Trump’s frequent use of the term fake news has prompted many online, especially Twitter, users to make puns similar to Gary the Gnu, posting fake gnus along with pictures of toy wildebeest figurines or drawings of the animal.

This is not meant to be a formal definition of GNews like most terms we define on Dictionary.com, but is rather an informal word summary that hopefully touches upon the key aspects of the meaning and usage of GNews that will help our users expand their word mastery.