What does meta-analysis mean?

Meta-analysis is a statistical process that combines the data of multiple studies to find common results and to identify overall trends.

Where does meta-analysis come from? 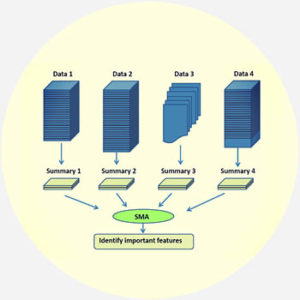 The prefix meta-, when added to the name of a subject or a discipline, forms the name of a new subject that analyzes the first one at a more abstract or higher level. It follows that meta-analysis is a field of study that analyzes already existing analyses.

Meta-analysis, in the statistical sense, was coined by the statistician Gene V. Glass. In a 1976 Educational Researcher article, Glass wrote, “The term is a bit grand, but it is precise and apt…Meta-analysis refers to the analysis of analyses.”

The process of meta-analysis itself predates Glass by several decades, and is featured in the work of well-known statisticians.

The term meta-analysis was also in use before Glass brought it its statistical sense. Since the mid-1900s, meta-analysis has been used in the discipline of philosophy to refer to the analysis of the foundational assumptions upon which individual theories or tenets are based.

“Meta analysis can be used as a guide to answer the question 'does what we are doing make a difference to X?', even if 'X' has been measured using different instruments across a range of different people. Meta-analysis provides a systematic overview of quantitative research which has examined a particular question.”
James Neill, “Meta-Analysis Research Methodology,” Wilderdom (May 10, 2006)
“When performed on a computer, meta-analysis helps the reviewer surmount the complexity problem. The reviewer can code hundreds of studies into a data set. The data set can then be manipulated, measured, and displayed by the computer in a variety of ways.”
Rudner, Lawrence, Gene V Glass, David L. Evartt, and Patrick J. Emery, A user's guide to the meta-analysis of research studies (2002)
“Meta-analysis would be used for the following purposes: To establish statistical significance with studies that have conflicting results; To develop a more correct estimate of effect magnitude; To provide a more complex analysis of harms, safety data, and benefits; To examine subgroups with individual numbers that are not statistically significant”
“Study Design 101: Meta-Analysis,” Himmelfarb Health Sciences Library (November 2011)
SEE MORE EXAMPLES

Meta-analysis is often used to determine general information from a systematic review procedure. By aggregating the results of several studies, statisticians are able to use meta-analysis to isolate the common findings.

This procedure can greatly reduce the margin of error created by variations in the studies, and allows researchers to gather more exact information. However, meta-analysis is fundamentally a human-driven process that can be biased or manipulated to serve different agendas. Past meta-analytical reports have been criticized for failing to include all available data or being influenced by the author’s personal interests.

Meta-analysis is often used in medical studies to determine the effects of a treatment on various subjects. Most recently, meta-analysis has been applied to studies involving gene expression in microRNA.

This is not meant to be a formal definition of meta-analysis like most terms we define on Dictionary.com, but is rather an informal word summary that hopefully touches upon the key aspects of the meaning and usage of meta-analysis that will help our users expand their word mastery.