What does micromobility mean?

Micromobility refers to the use of electronic scooters and bikes to travel shorter distances around cities, often to or from another mode of transportation (bus, train, or car). Users typically rent such a scooter or bike for a short period of time using an app.

Where does micromobility come from? 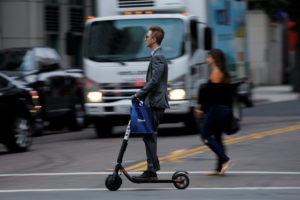 Perhaps you seen, used, or even cursed at one of those electric scooters that have been proliferating in major cities across the US and world. These scooters—along with electric or pedal-assisted bicycles and some other small means of transportation, such as electric skateboards—are part of an urban transportation trend called micromobility.

The term was specifically applied to this transportation trend by 2017, though the word can be found earlier as a technical term in computer sciences. Mobility refers to “ways of getting around” and micro-, “small,” alluding both to the size and length of trip for these means of transportation, which are intended to be help reduce congestion, pollution, and travel times, especially in urban areas with public transportation systems.

The idea behind micromobility is to have an efficient and environmentally-friendly way of getting around cities. A rider might rent a scooter to travel a mile to get to a bus stop or subway station for a longer trip to, say, the office. These distances often called the first or last miles, i.e., the distance to or from a main mode of transportation.

Micromobility is especially used of less electric scooter or bike sharing services like Jump, Lime, and Bird. Lime and Bird, two of the most well-known micromobility services, began in 2017 and saw extreme growth in 2018.

Typically, riders download a company’s app and pay to rent for a short period of time the e-transport devices, which are scattered across urban areas (they generally don’t have specific docking/parking stations).

While the sudden growth of micromobility has shown to reduce some congestion in cities, it also has posed issues of theft, vandalism, and safety, both to riders, pedestrians, bicyclists, and motor vehicle operators.

Just returned from Berlin and was amazed to see #micromobility and #escooters in action! Everyone from young to senior were using them. Although safe riding is still an issue! Too many near accidents...
@n_sauber, July 2019
Stand-up electric scooters have been around since the 1980s. But the latest trend in micromobility—dockless electric scooters—launched in 2017. They arrived in the District of Columbia in 2018, and now, just over a year later, thousands of scooters are on the streets.
Henry Zimmerman, NPR, March 2019 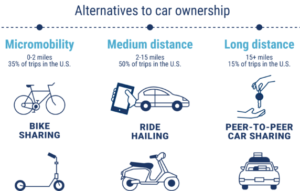 While many people take advantage of micromobility, the term itself is largely used in technology, transportation, business, and urban planning spaces, including in related popular media outlets.

“The world of mobility is undergoing a tremendous transition” – Porsche Consulting. It's a hot sector, and we're building core infrastructure at @helbizofficial 🔥 #urbanmobility #micromobilityhttps://t.co/Wj6K2QDkmv pic.twitter.com/BQYiYPrOYo

Micromobility, as a trend, has many praisers and detractors (especially as it regards the way they are perceived to have “taken over” public spaces and may obstruct pathways for people with accessibility needs).

Electric scooters are not as dangerous as our inability to build infrastructure for them. Same for bikes. From a higher level, the world should be embracing micromobility and we should figure out how to make it safe for everyone including pedestrians.

New sidewalk conflict: micromobility, scooters, pedestrians safety and #accessibility. Meanwhile cars are still monopolizing greater privilege in cities space distribution. It is a mobility challenge and must be addressed as an opportunity to change #UrbanMobility hierarchy. https://t.co/pII4uTEMyf

This is not meant to be a formal definition of micromobility like most terms we define on Dictionary.com, but is rather an informal word summary that hopefully touches upon the key aspects of the meaning and usage of micromobility that will help our users expand their word mastery.