What does nomophobia mean?

Where does nomophobia come from? 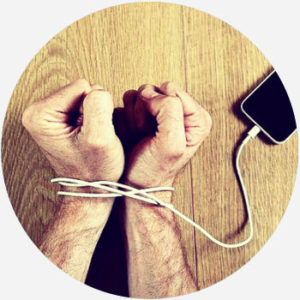 The term nomophobia first appeared as nomo-phobia in the results of a 2008 UK Post Office study, which contracted UK research agency YouGov to study anxiety in mobile phone users. The term is a portmanteau of no, mobile phone, and phobia.

According to that study, more than 13 million people in the UK—over 50% of mobile phone users—suffered from stress akin to visiting the dentist or getting married when they were out of range of their phones.

The term nomophobia has become more common as more studies about the effect of mobile phone use on human behavior have been conducted. A study published by Hungarian researchers in 2016 found that participants exhibited significant levels of anxious behavior only a few minutes after their phones were taken away from them.

A 2015 article in Scientific American defined the phenomenon of nomophobia as: “the degree to which we depend on phones to complete basic tasks and to fulfill important needs such as learning, safety and staying connected to information and to others.”

“Disturbing. People prefer to have a broken bone vs.a broken phone. New term -- NoMoPhobia--fear of no mobile phone. #WeAreDoomed”
Tina Snider @elincomm Twitter (April 11, 2017)
“If the answer to any of these questions is yes, then you may be a nomophobe, and you are not alone. Nomophobia -- the fear of being without your cellphone -- is on the rise, according to a new report sponsored by SecurEnvoy, a company that specializes in digital passwords.”
Deborah Netburn, “Nomophobia -- fear of being without your phone -- is on the rise,” Los Angeles Times (February 17, 2012)
“The fear of being apart from your phone has even got a name - it's called nomophobia, which is an abbreviation of 'no-mobile-phone phobia'.”
Imran Rahman-Jones, “Separation from your phone 'makes you stressed within minutes',” BBC (February 20, 2017)
SEE MORE EXAMPLES

Though nomophobia has not yet made its way into official manuals of psychiatric diagnoses, its use is widespread enough for both research articles and popular news articles to use the term in titles and headlines.

Along with the rise of research into nomophobia have come articles discussing how to overcome or end it. As such, the term has taken on a negative connotation with health writers.

This is not meant to be a formal definition of nomophobia like most terms we define on Dictionary.com, but is rather an informal word summary that hopefully touches upon the key aspects of the meaning and usage of nomophobia that will help our users expand their word mastery.