Everything After Z by Dictionary.com
Previous Word: nomophobia
Next Word: pink eye

Can I take the maximum daily dose of Percocet 5 all at once?
@almostpaleo2, April, 2018
Percocets, molly, Percocets / Percocets, molly, Percocets / Rep the set, gotta rep the set / Chase a check, never chase a bitch
Future, "Mask Off" (song), 2017
The unknown opioid is a modified type of fentanyl that the GBI Crime Lab had never seen, the bureau said. The pills were made to resemble the prescription painkiller Percocet and sold on the street, according to state officials.
Michael Nedelman, CNN, June, 2017

Where does Percocet come from? 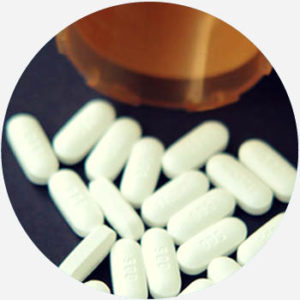 Percocet is a trade name for an oral drug combining oxycodone (hydrochloride) and acetaminophen, two common types of pain-relief medications.

A mixture of oxycodone and aspirin called Percodan was released in 1950. First developed by Vintage Pharms and later acquired by Endo Pharmaceuticals, Percocet was first approved by the US Food and Drug Administration (FDA) in 1976 to relieve moderate-to-severe pain and reduce fevers on a prescription basis.

Since Percocet contains oxycodone, it is considered a highly addictive opioid and a controlled substance. It is one of several oxycodone-based products, including OxyContin, contributing to the opioid epidemic sweeping the US since the 1990s due to overprescription, abuse, and illegal drug-dealing.

Causing painful withdrawal symptoms, a Percocet overdose slows the body’s natural functions and, when not leading to death, causes serious side effects such as depression, seizures, and jaundice.

While the trade name is properly Percocet, the drug is commonly referred to in the plural, Percocets. Other brands of the drug include Endocet, Depalgos, and Roxicet.

The term Percocet is widely used by health professionals, including doctors, nurses, and pharmacists, as well as patients prescribed the drug for chronic pain.

Percocet is also well-known to opioid drug addicts, dealers, law-enforcement agencies, and public-health officials who deal with opioid abuse. Street names for Percocet are many, including bananas, blues, buttons, ercs, percs, and kickers.

Percocet frequently comes up in the popular press in relation to celebrity overdose deaths, including Prince in 2016 and Tom Petty in 2017. The prominence of Percocet as a painkiller, both as prescribed and abused, has led to their familiar reference in popular music, especially hip-hop. The Philadelphia-based punk band, The Percocettes, formed in 2006, their name punning on the drug.

Given how addictive Percocet can be, addiction experts recommend only discussing the drug with trusted individuals and professionals.