What does pink eye mean?

Pink eye is the common name for conjunctivitis and occasionally used as a slang term for the vagina.

Where does pink eye come from? 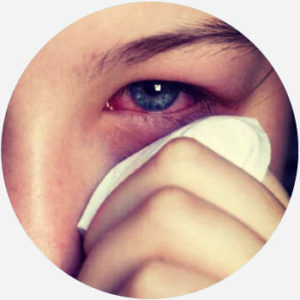 Pink eye is a familiar name for conjunctivitis, or the inflammation of the conjunctiva (the membrane covering the eyes and lining the eyelids). It is a common viral or bacterial infection, affecting 3–6 million people in the US alone each year. The name stems from the way the condition makes the eye look pink or red along with other symptoms of itchiness, watering, and swelling.

While pink eye typically cures itself, antibiotics are sometimes necessary. It is often contagious, except when caused by allergens, passed directly from a person or from contaminated objects.

One common myth, popularized by the 2007 Seth Rogen comedy Knocked Up, claims that pink eye is spread from fecal bacteria left on pillows from flatulence. Related myths include that the infection results from eye contact with the anus or semen during sex. The infection, rather, is principally caused by rubbing the eyes with hands carrying a certain virus or bacteria. 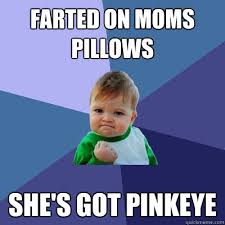 Occasional and unrelated senses of pink eye include slang terms for “vagina” and “cheap red wine.” The “vagina” slang has been recorded since at least the early 1990s based on anatomical observations. The “wine” sense, extending to a “heavy drinker” or “binge-drinking,” dates back to Australian slang from the early 1900s into the 1970s.

If a butthole is a brown eye / A vagina must be a pink eye!
@Baitclicker, February, 2018

The Centers for Disease Control and Prevention (CDC) has released prevention, diagnosis, and treatment tips for pink eye.

Madeline Morr, The Clinical Advisor, April, 2018
still pissed at the guy who gave me the finger after i honked at him for cutting me off. i hope someone farts on your pillow so you get pink eye
@desmond_shea, April, 2018
SEE MORE EXAMPLES

While the formal name may be conjunctivitis, many medical professionals refer to the condition as pink eye. The term is also familiar to parents of and educational professionals working with school-aged children, who are instructed to stay home from school due to contagious pink eye.

Pink eye is also colloquially mentioned in contexts of vulgar humor (e.g., I’m gonna fart on your pillow and give you pink eye). 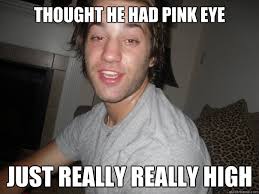 This is not meant to be a formal definition of pink eye like most terms we define on Dictionary.com, but is rather an informal word summary that hopefully touches upon the key aspects of the meaning and usage of pink eye that will help our users expand their word mastery.