What does Pyrocene mean?

The Pyrocene is a proposed geological epoch characterized by humans’ use of fire, especially how the burning fossil fuels impacts Earth.

Where does Pyrocene come from? 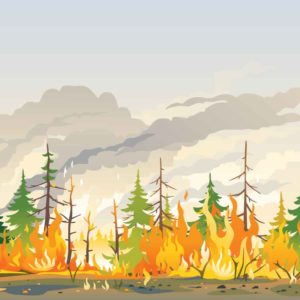 Humans harnessed the power of fire over one million years ago. Since then, it’s been used for crafting weapons, cooking, and razing land. The power of fire is viewed by some to have become destructive when the burning of fossil fuels contributed to the climate crisis. Enter the Pyrocene. It’s a proposed era where humans’ use of fire has lasting consequences on Earth.

Pyrocene is composed of two parts: 1) the prefix pyro- for “fire,” and 2) the suffix -cene, which follows the naming pattern of previous epochs like the Miocene. (This suffix comes from a Greek word meaning “new.”) The Pyrocene would be the successor to the Anthropocene, which is another proposed geological time period characterized by humanity’s effect on the planet.  The Anthropocene’s beginning dates are disputed, ranging from 15,000 years ago to the 1960s, and this uncertainty makes precisely dating the proposed Pyrocene even more difficult.

The term Pyrocene was coined by fire historian Stephen Pyne in 2015. Pyne proposed the term as a way to understand how humans’ use of fire impacts Earth.

Conversation surrounding the Pyrocene came to a head during the 2019 California fire season. This season in the state was characterized by wind carrying dry air, which can set off wildfires that can burn many thousands of acres. Since climate change is linked to a rise in California’s temperatures, the summers are hotter, and the fires more widespread and intense. The increased length of the fire season and great destruction caused by the fires is making more and more people wonder whether we are, in fact, living in a new epoch.

The climate is changing the weather. The weather is now creating its own weather. Science says we've got 10 years to fix it. We had 162 years of warnings about the dangers of greenhouse gases. Ten years before we enter the Pyrocene Era. Q fires today show us our future.
@GDixon1977, November 2018
It’s easy to think of climate change as a creeping problem, that sea levels will nudge higher and higher and we’ll adapt accordingly. But in California, climate change and an army of conspiring factors have joined forces to lay siege on the state, turning it into the front line of the Pyrocene.
Matt Simon, Wired, October 2019

Pyne considers the Pyrocene to be a way of understanding the Anthropocene through the lens of fire. At the core of both of these ideas is the use of fossil fuels, rapid industrialization, and how both of those things have contributed to climate change.

In October 2019, talk of the Pyrocene spiked as news outlets such as Wired reported on the California fire season. They used the Pyrocene to discuss how increased fires were due to climate change and humanity’s reliance on fire (in the form of burning fossil fuels).

Internet discussions tend to use the Pyrocene and Anthropocene synonymously, although the Anthropocene is more widely used as it gains increasing legitimacy in the scientific community.

End of the Holocene. Start of the Pyrocene.

My grass got brown this summer too! CA just doesn't get enough rain. Great for making movies & tv shows but so not good otherwise

California Wildfires Signal the Arrival of a Planetary Fire Age
By Stephen Pyne
Has Earth entered the Pyrocene?https://t.co/cYP2UU7U2E

This is not meant to be a formal definition of Pyrocene like most terms we define on Dictionary.com, but is rather an informal word summary that hopefully touches upon the key aspects of the meaning and usage of Pyrocene that will help our users expand their word mastery.