Feedback
Previous Outcry And Other Trending Words On Dictionary.com Next Do You Know What These Weird Plurals Mean? 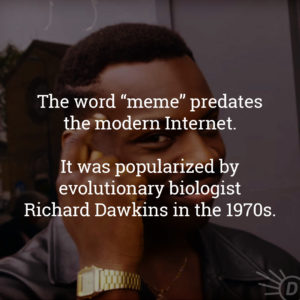 The word meme, coined in 1976 by the evolutionary biologist Richard Dawkins, goes way beyond social-media pixels. Meme captures the concept of “cultural transmission” of ideas in general, where customs and ideas spread from brain to brain.

Which means memes have been around longer than Success Kid or Kermit sipping tea. Wildfire ideas have been around as long as humans have—in fact, discovering fire is like meme 0.0. From folklore to Mr. T Ate My Balls, these are the OGs of memes.

If memes bring people together around ideas, and if a primary component of meme-culture today is the creative engagement users have in imitating, remixing, and sharing memes with others, then folklore is definitely one of the oldest and broadest memes in history.

All these texts are communicated from person to person, passed down over generations and across cultures. Yeh-Shen is Rhodopis is Chinye is Ashpet is Cinderella is Ella Enchanted. These folk artifacts eventually reach thousands or even millions of people, not as static lumps but as evolving creative stories that each person uniquely receives, shapes, and shares.

Clapping games are an example of folklore, and thus of popular pre-internet memes. They prove “participatory culture” isn’t just an internet buzzword, and that it starts early in life. Children gather on the playground to socialize, swap sammies, and say “Ew, cooties!” whenever little members of the opposite sex rub elbows. They also play a lot of games.

The rhythm of clapping games is what draws youngsters in. Knowing the clap choreography and the fun rhymes (and being able to do both at the same time)—these are hallmarks of coolness to a 3rd-grader.
Researchers studying “playground cultures” describe how kids take formulaic memes and adapt them in distinctive ways. Like a mashup of Michael Jackson dance moves and “A Sailor Went to Sea”? We’d love to see see see that.

Alas, schoolyard clapping games and other joys of youth don’t last forever. Memes today revolve around the often dull realities of everyday life. One reality we must all face: death.

For hundreds of years, artists have employed and remixed images of skulls, hourglasses, and other symbols of mortality in paintings and sculptures. The underlying meaning of these art objects, called memento mori, was widely known in the 1600s and for centuries before and after. Memento mori means “remember that you must die.” Gee, thanks. Despite the grim reminder, there couldn’t be a better name for one of the earliest memes: memento mori.

Just as a pair of glasses is immediately symbolic of “hipster” in memes today; dripping candles, wilting flowers, and rotting fruit were identifiable emblems of death. Carpe Diem, folks!

What was it we said about “participatory culture”? Well humans like to . . . participate with each other in lots of ways!

And, that hasn’t changed for millennia. Some of the earliest memes in history are symbolic of the (usually) participatory act of sex. Notably, penis art is classic meme 1.0. Cavemen etched penis pics on cave walls as far back as 12,000 years ago. The original dick pic?

The Ancient Romans took penis graffiti to new heights. Penises were everywhere—on walls, statues, mosaics, even necklaces, and wind chimes. These images were allowed because Ancient Romans had a more accepting view of sex and sexuality than, say, people in the Middle Ages. That said, penile imagery continued on into Medieval and Renaissance societies. In fact, one popular “retweeted” depiction at the time was the “Phallus Tree,” a picture of a tree with penises growing out of it.

With a giant leap forward in history, the next pre-internet meme involves a mythical character named Kilroy, who happens to possess a very schlong-like schnoz (while we are still thinking about phalluses and all). “Kilroy Was Here” is a graffitied message that went viral during WWII. The text usually appeared with a simple cartoon of a bald man peeking over a wall, his distinctive long nose in full view.

Kilroy’s origins are unknown, but legend has it a US shipyard inspector named James J. Kilroy used the message to mark bulkheads after he finished inspecting them. The drawing might be based on a British cartoon named Mr. Chad. When the Americans met the British, Mr. Chad met Mr. Kilroy.

The message took off with GIs from the US and the UK, who spray-painted it everywhere they went during the war. GIs even considered Kilroy a “super-GI,” a reassuring presence that they weren’t alone in the fight.

In the 1960s and ‘70s, a counterculture grew up opposing the Vietnam War and protesting for human rights. Set in an imagined (but all-too familiar) world of conflict between warring factions (good and evil), J.R.R. Tolkien’s The Hobbit and Lord of the Rings were incredibly popular with people in the counterculture hippie movement. Protesters fighting for marginalized peoples found great inspiration in revolution by the “little people'” (the Hobbits).

“Frodo Lives!”was a wildfire slogan that appeared on buttons, posters, flags, stickers, and t-shirts. Frodo Baggins was pretty much a badass, and the hippies thought they were, too. Match made. The meme’s message “Frodo Lives!” is twofold: Without dispute, Frodo carries on despite narrowly escaping death countless times—he survives the Cracks of Doom, people! He also (maybe, just maybe) achieves immortality.

Tolkien’s descriptions of hallucinogenic drug use in his novels probably had an effect on Frodo’s popularity at the time, too (“Hobbit-forming” was another t-shirt slogan).

Andre the Giant has a posse

Flash forward to the 1980s, and a different sticker stuck with a new generation of counterculture youth—especially on skateboards. The meme was created by the artist Shephard Fairey (you may have seen his work on a certain Obama Hope poster). 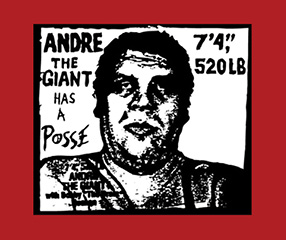 And, yes, Andre the Giant is the giant from The Princess Bride. But, he was also a rockstar wrestler. When Fairey was in design school, he created a thick stencil of Andre’s face, alongside the text “Andre the Giant Has a Posse” and some whopping body stats (7’4” and 520 lb.).

Skaters took up the sticker, and soon, Andre’s face was everywhere. Fairey said the sticker started as a joke, “a skate crew thing.” “Wrestling was the most uncool thing to uberhip skaters,” but the meme was so funny because of the paradox. It had “no meaning” except “to cause people to react.”

And, that’s pretty much 99% of internet memes now.

Remember this guy . . . nobody knows the origins of this highly secretive “S” symbol, but, what an amazing OG meme. Six parallel lines linked together in cool ways by awesome diagonals to form something that looks like . . . the letter S! Those angular braided-looking S’s populated notebook covers by the score, in every sunny and dismal hue, in permanent marker, metallic gels, even etched with paper clips (so hardcore).

It’s not inspired by the Suzuki car logo, the Saxon logo (ancient or ’80s), the Superman symbol, or the ‘80s-band Styx. Not even the skate/surfwear company Stussy can claim the meme (even though they use it).

Instead, a London professor of language and media says the impetus behind this meme’s firepower is—drumroll, please—it’s fun to draw. We can’t argue with that!

We’d be fools not to include a couple of the earliest digital memes, from the World Wide Web days of the ‘90s. So, now we’re entering more recognizable meme-territory.

One of the earliest memes born into the world of digits and pixels was actually a baby. Well, a computer-animated baby. Baby Cha-Cha-Cha, also known as Dancing Baby, was the first meme to go viral on the internet.

The meme was created in 1996 to showcase the amazing abilities of the new CGI software by Kinetix Character Studio. With a sashay of tiny hips, Dancing Baby cha-cha’d onto TV newscasts across the country. The hit show Ally Mcbeal aired encore performances of Dancing Baby, using the gif as an apparition that haunts and taunts Ally about her swiftly-ticking biological clock.

A 1998 CNN story about Dancing Baby describes it as a “meme” and provides the definition (“a contagious idea”); the fact that an explanation was needed reveals that the term meme wasn’t widely known at the time.

In 1997, a year after Dancing Baby boogied, a meme in another recognizable format burped onto the scene. “Mr. T Ate My Balls” brought together still-image and text. The meme’s creator, Nehal Patel, was a student at the University of Illinois, Urbana-Champaign at the time.

According to theballreport.com, the exit sign of Patel’s dorm room was removed by “a vandal” and replaced with the mysterious words “Mr. T Ate My Balls.” The entire floor, then dorm, then campus went BALListic. Suddenly, photocopies of Mr. T (the A-Team actor and wrestler) and references to eating testicles were everywhere. People produced knock-offs left and right, and the meme spread through e-mail (note the dash) and in large part through Patel’s webpage (archived here). After Mr. T began the culinary endeavor, Chewbacca, Jar Jar Binks, and even Nobel laureate Bertrand Russell all “Ate My Balls.” 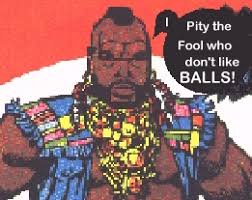 The basic formula for the meme then and thereafter was outlined: poor-quality images accompanied by unedited declarative text—in this case about eating balls. And, the internet meme was officially off and running.

Similar to that little “S” above, the Pen 15 club ran rampant across middle-schools in the early 2000’s. This was a club for mainly pre-pubescent boys, and the meme consisted of this: A boy would write (note the two separate lines):
“Pen
15”
on his hand, and then ask other boys if they wanted to join the “pen15 club.” If they said “yes,” they would go through the “secret ceremony” where the original member would write “pen15” in marker on their hand so that it looked like the word penis. The marker was key so that they were left with the word on their hand all day.

You know what else existed before the internet? Clickbait. Read more about clickbait’s history here.

Previous Outcry And Other Trending Words On Dictionary.com Next Do You Know What These Weird Plurals Mean?
RELATED POSTS