Everything After Z by Dictionary.com
Previous Word: Allahu Akbar
Next Word: baiser 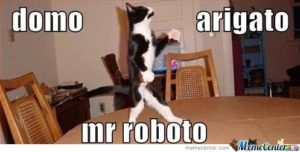 Where does arigato come from?

Despite popular speculation that arigato comes from the Portuguese for “thank you,” obrigado, arigato was in use in Japan well before any contact with Portugal.

Arigato (ありがとう) comes from the words arigatashi (“to be”) and katai (“difficult”). Arigato, then, has a literal sense of “being alive is hard”—true.

Arigato became used to express gratitude (in appreciation of goodness despite life’s challenges), eventually morphing into a more general expression of thanks over time. 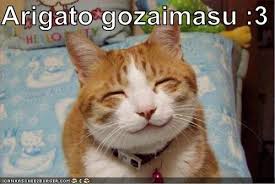 Fast-forward to the United States in the 1980s. The Japanese economy was booming, Shogun was a huge hit on TV, and obsession with all things Japanese, especially electronics and sushi, swept the country.

Some were even paranoid that the Japanese were going to take over the US. Add in fears about the breakneck speed of technological advancements changing the way Americans lived, and you have the perfect environment for Dennis DeYoung’s prog rock anthem about a dystopian future full of robots. “Mr. Roboto” was the opening track on Styx’s 1983 concept album Kilroy Was Here and reached #3 on the US charts.

The song’s chorus, “Domo arigato, Mr. Roboto” quickly became an earworm and catchphrase—and the only Japanese words that many English-speakers knew.

In Japan, arigato is a simple way of saying “thank you” among familiars or peers. Politeness is highly valued in Japanese culture, so be mindful that there are more formal ways to say “thank you” to superiors or elders (e.g., arigato gozaimasu, which is a more polite way of saying thanks).

The fans here in Japan are amazing. So patient and polite. Thank you for all the love. Today’s a special 80th pole with you guys. Arigato 🙏🏾 🇯🇵 pic.twitter.com/5p2qwDS7BH

Westerners who don’t speak Japanese or have picked up some key phrases while traveling in Japan will likely know arigato from Styx or Japanese cultural products or establishments.

Fun fact: Styx apparently didn’t play “Mr. Roboto” live for 35 years, reportedly because guitarist Tommy Shaw hates the song, but as of May 2018, the band is back to domo arigato-ing on stage.