What does ennui mean?

What's wrong, mon ami? Are you suffering from ennui, a French word for "boredom."

I'm bored, Bored Button, this is why I’m broke, text me,

Where does ennui come from? 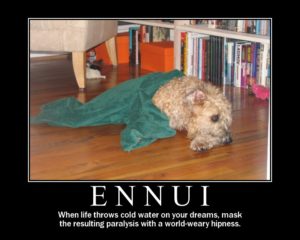 The word ennui comes from an old French word meaning “profound sadness, chagrin, or disgust.” Among French speakers, ennui can also refer to “disagreeableness.” It comes from a Latin word that also gives us the word annoy. 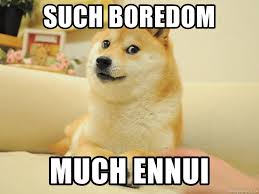 English borrowed ennui by the 1660s to express a “weary boredom” that results from dissatisfaction or idleness. A 1778 definition of bore describes it as a “thing which causes ennui or annoyance.” 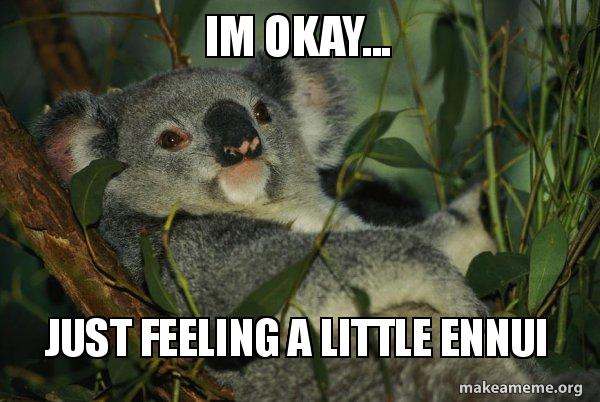 Like in French, ennui became used in English to describe a feeling of discontent almost as if it was an actual object. It usually has a kind of wistful listlessness.

Dramatic girls thrive in fall with our trenches and moody lip colors and palpable ennui
@shelllfishh, September, 2018
The prospect of being with your significant other forever. Does it sound like eternal bliss? Or a recipe for soul-crushing ennui?
Brad Newsome, The Sydney Morning Herald, September, 2018 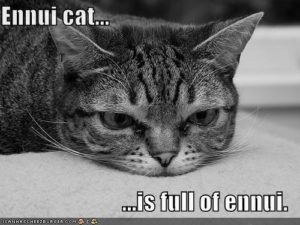 Ennui, as a fancy word for “boredom,” implies discontent and angst. It is often used as if one were describing an illness, as in “I’m suffering from ennui.” It’s a tricky word to define in English—probably because it comes from French.

Hi I'm Stu and I have PTSD that leads to bouts of depression and ennui. Tonight is one of those nights. You're not alone in your feelings. We are all in this together.

Ennui remains associated with the kind of existential emo-ness and can be used for melodramatic effect. 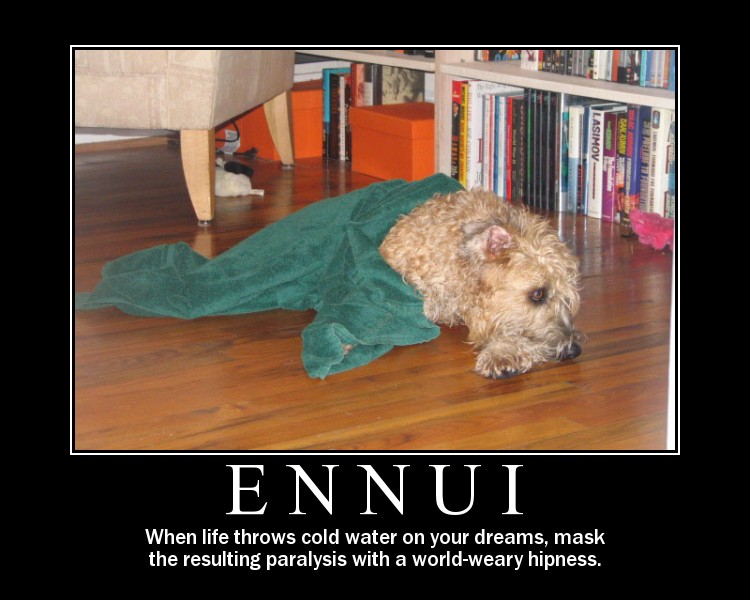 Cilantro divides us. But can we not understand that all good has become something that is attached to both ennui and anger- why don’t we simply accept one another’s cilantro preference and then work towards a centrist peanut butter driven economy?

This is not meant to be a formal definition of ennui like most terms we define on Dictionary.com, but is rather an informal word summary that hopefully touches upon the key aspects of the meaning and usage of ennui that will help our users expand their word mastery.