Everything After Z by Dictionary.com
Previous Word hygge
Next Word kawaii

The phrase was borrowed into English as an expression of a quality that makes something or someone attractive, distinctive, or special in some way, but is hard to put into words.

I got a certain “je ne sais quoi” about me. Vibes be off the richter. I definitely been attracting a certain type lately & im lovin’ it.🤷🏾‍♀️
@ChoklateWasted_, December 2018
I think that the French je ne sais quoi is more about the attitude. But more tangibly it's about the details, whether that's beautiful jewellery, beautiful basics or just beautiful materials.
Adenorah (blogger) quoted by Elinor Block, Who What Wear, November 2018 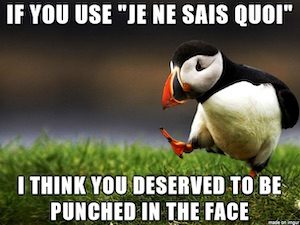 Where does je ne sais quoi come from? 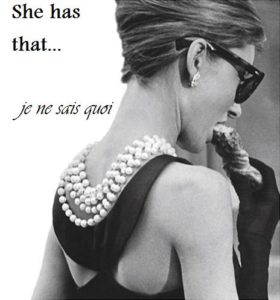 The French phrase je ne sais quoi was borrowed into English as early as the 1650s to characterize some inexpressible, indefinable, or ineffable quality, such as some element that makes an engaging work of art or charismatic person special.

Often phrased “a certain je ne sais quoi,” the saying is similar to the English expression a certain something, although the original French has a kind of je ne sais quoi all its own, don’t you think?

Je ne sais quoi continued on in English through the centuries, used widely in speech and writing as a learned expression that can lend a text or utterance a sophistication—or pretentiousness.

In 2014, interest in je ne sais quoi spiked after it was the butt of a joke in a commercial by the fast-food restaurant Sonic. In it, two men are eating chicken wings when one says the chicken will be his wingman. The other scoffs at the idea that the chicken would give him a certain je ne sais quoi. The first man, ignorant of the expression and thinking it’s a girl named Jenna interested in him, responds “Jenna said what?”

Je ne sais quoi can be used to express the inexpressible in a way that can variously sound smart, worldly, or French-y. The “special sauce” that je ne sais quoi conveys is almost always positive or desirable in some way.

Watching art detectives on #FakeOrFortune. Intriguing program… it scratches a particular itch for me. Can't quite explain it! Je ne sais quoi, as it were. An artist's daughter can only take the subject of attribution a bit personally, it seems!!

Sometimes its use is earnest, other times a parody of fancy talkers.

It doesn't rhyme, but it has a certain je ne sais quoi. https://t.co/4X9C3SbkKf

This is not meant to be a formal definition of je ne sais quoi like most terms we define on Dictionary.com, but is rather an informal word summary that hopefully touches upon the key aspects of the meaning and usage of je ne sais quoi that will help our users expand their word mastery.