What does Waldeinsamkeit mean?

Waldeinsamkeit is a German word that refers to the feeling one has while being alone in the woods, usually a sublime or spiritual one.

Where does Waldeinsamkeit come from? 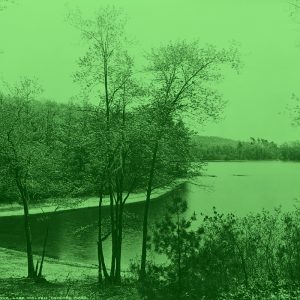 German is famous for what are sometimes called untranslatables: single words whose definitions are wonderfully specific or complex enough that, when translated into another language, they require numerous words to express the same idea. Waldeinsamkeit is no exception.

It combines Wald (“wood”) and Einsamkeit (“loneliness”). Together, Waldeinsamkeit literally translates to “solitude in the forest,” but that literal translation loses the word’s poetry.

I'm most happy with life when I'm bathing in the world around me. Taking the time to slow things down and look…feel, smell and remember. 🍂🌼

Due to its landscape, this is best conveyed for me in Arkansas as Waldeinsamkeit. But here in Idaho, I think Hygge is more appropriate.

The origins of Waldeinsamkeit clue us into its lyrical meaning. Attested in German by at least 1822, the word is closely associated with Romanticism, a literary movement that idealized emotion, nature, individualism, and the imagination. Early uses of Waldeinsamkeit came from German Romantic poetry that celebrates the quiet serenity of being solitary in the woods. 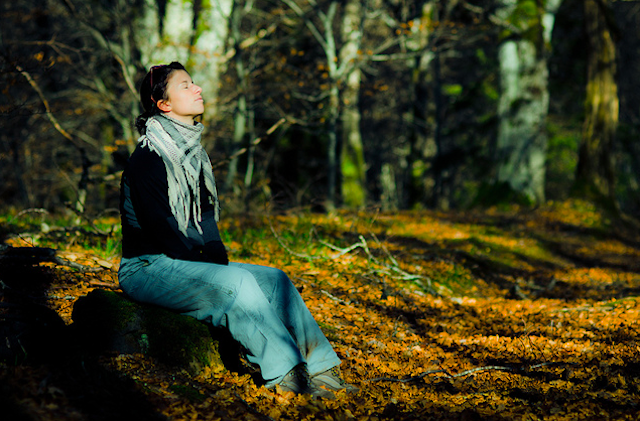 Waldeinsamkeit made its way into American Transcendentalism, which also praised he spirituality of the individual and nature. In 1858, for instance, Ralph Waldo Emerson published a poem called “Waldeinsamkeit” in The Atlantic Monthly about how much he loved being in the forest, removed from the crises and considerations of society.

Christoph Waltz puts Jimmy to the test with a quiz on the definitions of long German words. pic.twitter.com/QazUVK3h2p 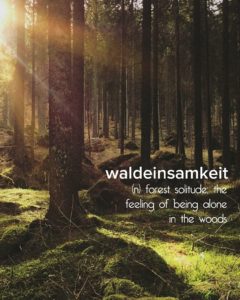 Devon Strang / Pinterest
Finally found the word for what I felt while Himalayan peaks stared right into my eyes- Waldeinsamkeit. #ParvatiValley
@apjayanthi, July 2016
We're living in a remarkable time, when it will soon be impossible to be truly alone. Waldeinsamkeit becomes more and more endangered with every cell tower. And if you're the kind of person who can only leave email behind when you go off the grid, that means you're going to need a new plan.
Mat Honan, Wired, October 2013
SEE MORE EXAMPLES

Can’t put into words that spiritual satisfaction you get when you’re alone in nature? Well, Germans can, and it’s Waldeinsamkeit. Note that it’s properly capitalized, as is true for all German nouns.

Having a bad day last Friday and got up early next day for a walk in the woods, where I've always been happiest. It was amazing. Best I felt in months. Then a friend told me about this amazing German word "Waldeinsamkeit – Solitude of the forest" https://t.co/ufNtq30Jie

I'm on my way to Finland for some Sibelius-worship and Waldeinsamkeit. I'm now in Düsseldorf Airport, which is one of the best in the world. Stylish, easy to navigate, roomy, and clean as a whistle. Just a reminder that Germans can, actually, build airports. pic.twitter.com/10IZ8VyRID

When not used for its literal sense, Waldeinsamkeit is often featured in lists of untranslatable words prized for the way they so poetically package the complexity of human experience into a single word.

23 Emotions People Feel but Can't Explain. I love this list, although they left off my favourite, 'waldeinsamkeit', which is "the feeling of being alone in the woods."
Like Little Red Riding Hood, one presumes.
Does anyone have any others? pic.twitter.com/MyNP4JXTfk

This is not meant to be a formal definition of Waldeinsamkeit like most terms we define on Dictionary.com, but is rather an informal word summary that hopefully touches upon the key aspects of the meaning and usage of Waldeinsamkeit that will help our users expand their word mastery.