What does wepa mean?

Where does wepa come from? 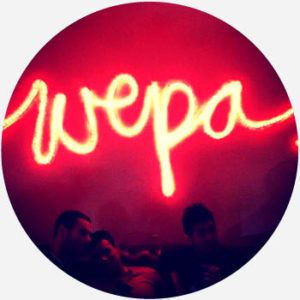 In Puerto Rican Spanish, wepa is a versatile slang interjection that apparently originates as an imitation of the English Woo-hoo!. The term rose to prominence in Puerto Rico thanks to the 1974 song “El Jogorio (Wepa Wepa Wepa)” by Alfonso Velez. The song was a hit in Puerto Rico and became popular throughout Latin America and the Caribbean.

Raising wepa’s profile online, the hashtag “#WepaWednesday” emerged in 2009 as a positive alternative to the English hump day (i.e., an occasion to find joy—Wepa!—in the middle of the week vs. complaining that the workweek is only half over). Many Latinx peoples embraced the hashtag as an opportunity to celebrate all things Latin. 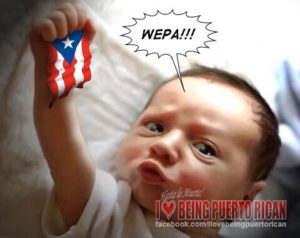 A resurgence of the word came into pop culture with Gloria Estefan’s 2011 song “Wepa.” In 2015, a Mexican band, Kings del Wepa debuted, continuing wepa’s frequent use in Latin music and dance.

Puerto Rico could recover nearly all of the power it lost after Hurricane Maria by the end of next month.” 🇵🇷 #wepa
@GMA, February, 2018
That's worthy of a #WepaWednesday! Congrats, chica! RT @sarachicad: just paid off my grad student loans! woopie! #atodamadre
@thessaetc, 2011
Panos predicted the Greek government’s stance towards Germany, and the bailout and Maurica made everyone feel ‘WEPA’ (a slang term of endearment among the Latin communities…)
Phil Provencio, The Interrobang, May, 2017
SEE MORE EXAMPLES

Wepa is primarily used by speakers and writers of Spanish, both younger and older, as well as in Latin America and the Caribbean, especially Puerto Rico.

The exclamation is variously used to express amazement or great happiness, often in reaction to good news. It’s particularly popular at events where people are singing or dancing, encouraging high energy, movement, and partying. Internet users tag social-media posts with “#wepa” to express the sentiment, as well.

This is not meant to be a formal definition of wepa like most terms we define on Dictionary.com, but is rather an informal word summary that hopefully touches upon the key aspects of the meaning and usage of wepa that will help our users expand their word mastery.