What does wunderbar mean?

Wunderbar is a German word for “wonderful.” It may be used in English to hint at German-ness or simply as a substitute for wonderful. Numerous bilingual puns have been based on wunderbar.

Where does wunderbar come from? 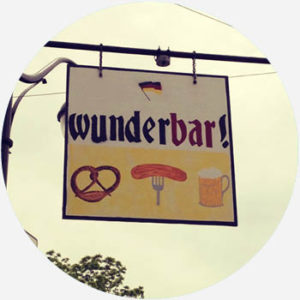 Wunderbar is a German word meaning “wonderful” or “marvelous.” The German wunder is related to English’s wonder but -bar is a suffix roughly akin to -able.

Wunderbar is sometimes used in English works to mark a character as German or call Germany to mind. In British author Beatrice Harraden’s 1903 novel Katharine Frensham, for example, the German character Herr Edelhart’s dialogue is in English but peppered with a handful of recognizable German words like wunderbar and fraulein (“young lady”). Cole Porter’s 1948 Broadway musical Kiss Me, Kate, later adapted into a film, includes a parody of a Viennese waltz titled “Wunderbar,” which is also in English with a handful of German words. Quentin Tarantino acknowledged the familiarity of English-speakers with wunderbar in 2009’s Inglourious Basterds, including a subtitle for lines in German that leaves wunderbar untranslated.

Wunderbar is also sometimes used as a play on words. A 1934 movie Wonder Bar takes place at a bar of the same name. Among others, there is a bar called Wonder Bar in Boston, Massachusetts and one called The G-Street WunderBar in Davis, California. Similar plays on words have been used as product names. A chin-up bar was marketed as a Wunderbar in 1970. Seven years later, Cadbury filed for a trademark for the Wunderbar chocolate bar. In the 1980s, cheesecake on a stick was sold as the Wunderbar.

Of course, wunderbar is often simply used as a playful, knowing, creative, or intensive substitute for “wonderful.” Jim Carey exclaims the word in 1994’s Ace Ventura for comedic affect.

Congratulations to these students for their "wunderbar" performance on the National German Exam...
@LakesEagles, March, 2018
After their show at Wonder Bar in Asbury Park, the music continued backstage long after the show had been over.
John Salimbene, The Montclarion, March, 2018
In some sense we've come full circle, from the wealthy amateur to the everyman 'citizen scientist', with technical & economic advance. Wunderbar!
@Patrick83063089, March, 2018
SEE MORE EXAMPLES

As noted, wunderbar is occasionally used as a substitute for “wonderful” for a Germanic or expressive flair in colloquial speech and writing, often as a stand-alone exclamation (e.g., Wunderbar!). Users who are familiar with its German-language origin usually pronounce its W like a V, as is true of German phonology. When wunderbar is used as a punning brand name, it’s usually pronounced like the English wonder bar.

Wunderbar has appeared elsewhere in popular culture. The band Tenpole Tudor released a 1981 song titled “Wunderbar,” which references a German woman using the expression. The American rock band Sparks released a song with the same title and German lyrics in 2002. There is also an Indian movie studio named Wunderbar Films. The name was inspired by Inglourious Basterds.

This is not meant to be a formal definition of wunderbar like most terms we define on Dictionary.com, but is rather an informal word summary that hopefully touches upon the key aspects of the meaning and usage of wunderbar that will help our users expand their word mastery.